RIP Wii U, you had some interesting ideas, and this was one of the more underrated ones.


Welcome patrons to my first installment of Retro Prose. A column every thursday where I dig back through my YEARS of writing critically and thoughtfully about video games and see what holds up, what doesn't, and what can be held up as something poignant.

And since the Nintendo Switch has been selling like a monster lately I decided to look back at a review I did for a game on the Wii U. A digital only download game from Koei Tecmo that was the latest in the Fatal Frame series. The weird thing is if they ironed out the controls, I wouldn't mind this experience being on the Switch. The gyroscope controls and single screen scheme alone would fix half the problems I had here.

So here it is!

Fatal Frame: Maiden of Black Water has a promising opening with one of the main characters in a dangerous situation. Disturbing and twisted apparitions are chasing her, she is totally defenseless, and it sets up just how dangerous things can and will get for the rest of the cast. For someone who hasn't touched the series until now, it did a good job of pulling me into its world of Japanese horror. But outside of a few effective moments, a lot of Maiden of Black Water's atmosphere and tension is consistently undercut by some baffling missteps and some pretty stagnant gameplay ideas.

The game revolves around three protagonists. Yuri Kozukata, a young woman with a traumatic past that has the ability to use limited psychometry to trace and uncover restless spirits. Ren Hojo, a paranormal investigator who works with the others with solving unusual cases and his assistant Miu Hinasaki. Their story revolves around Mt. Hikami, a once popular tourist spot now turned into a dangerous spiritually dark home for disappearances, mass suicides, and unsettling occurances. Desperate to keep their clients, and themselves alive, the characters need to take advantage of the Camera Obscura, a special camera that can damage and eventually banish any deadly spirits, while uncovering the mystery of Mt. Hikami's haunting.

Given this very basic description, it's very easy to see the ingredients for a potentially nasty horror game. Inherently empathic and inquisitive protagonists, large environment with varied locations, great environment for unsettling imagery like young people murdering themselves, and the very fact the unique selling point involves not only seeing the monster but looking it right in the face and telling it to smile and wait for the flash. But the way these pieces are arranged are so haphazard it's worrying. 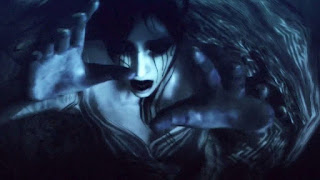 First and foremost, the characters are basically unlikeable. Completely emotionless cyphers who have one defining characteristic, the only thing I even remember about them is in the above description. There is a specific Japanese culture thing where someone showing no emotion in their voice is a sign of great emotional trauma, but it still doesn't stop the English voice-acting from feeling stiff and lacking in any distinct personality. A traumatized person doesn't mean a bland person after all.
But this is Tecmo Koei, the studio responsible for Dead or Alive haven't exactly been known for complex characters or riveting plot in the past, and the gameplay here fares a bit better. Every story chapter involves one of the three characters tracking down some information to forward the plot or, more often then not, rescuing another character. They trek up the mountain, run into some angry ghosts, then trek back down the mountain.

I can say that the first few levels are not bad. Stretches of ten to fifteen minutes go by without a single ghost popping up and even then are preceded by unsettling details like suicide notes, a particular highlight was dealing with the ghost of a man who hung himself whose neck continued to pop and lull at a disturbing angle. Certain locations manage to maintain a pretty chilling atmosphere with the standard imagery of shrine maidens, creepy dolls, and delapidated buildings.
Also, the combat with the Camera Obscura is pretty novel, barring some problems. There are different types of film that the camera uses with varying degrees of power, the stronger ones being more limited and increase the “reload” time before you can take another photo. As you chip away at a ghost's health you build up energy which you can use to activate certain lenses on the camera like stunning the ghost or doing an extra amount of damage. But probably the riskiest and most exciting mechanic is the titular Fatal Frame, a brief moment where taking a picture of a ghost in the middle of an attack will not just deliver additional damage but grant a brief state where you can take photos rapidly in order to really lay on the spiritual smackdown.

But even the most sound combat system and plot set up can be let down by poor design decisions. While various environments are reused to an obsessive degree, each level is aggressively linear. Invisible walls are everywhere to ensure you only go exactly where the game wants you to go, killing any immersion the game otherwise works very hard to maintain. Also, when dealing with ghosts in narrow claustrophobic environments things become an exercise in patience and frustration as they can you attack you basically with impunity since the camera won't damage a ghost unless they're mostly visible. 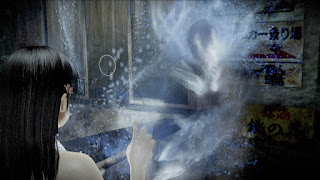 Compounding this is the pretty finicky controls for the Camera Obscura that uses the Wii U Gamepad. Whenever you are playing and switch to the Camera, you aim using the gamepad's gyroscope and tilt it in order to change the size of the frame like a real camera. But switching back and forth from the tablet screen to the TV can get really disorienting, causing minor fits of motion sickness. Not to mention the control problems of holding the tablet sideways and remembering that down doesn't translate to down anymore. What makes this a problem that can't really be sidestepped, the gyro controls can be turned off and off-tv play is a feature implemented well, is the phantom expose puzzles where you must take a photo at a certain angle from a certain distance to unlock a room or uncover a key.

Also, perhaps the most glaring problem is Maiden of Black Water's severe pacing issues. Every single chapter opens with a text crawl summarizing what is about to happen, the level begins, you fight some ghosts, then a text crawl bookends the level explaining exactly what just happened. It's not just a poor bookend, it's redundant in a narrative where the characters are basically forgettable and any story revelations have been reiterated incessantly to the point of unwitting parody. You would think after the fourth time Yuri or Ren witnessed someone about to slash their own throat they wouldn't react to it the same way. But even if this was excusable, one can even argue it's this logic that makes the game fascinating, the only way the gameplay ever increases its challenge is to throw more ghosts at you with varying levels of cheap attacks.

Topping off these serious annoyances are some movement issues and minor feature gripes. Walking around feels stiff and slow. Doing something as simple as turning around brings back bad memories of the old forklift controls from early Resident Evil and Silent Hill, and the button to recenter the camera is the same that causes a character to sprint forward, making things worse. As for ancilliary mechanics, there is a wetness gauge which increases the damage ghosts deal to you if you don't dry off, a feature that might as well not exist since the damage increase is negligible at best. Lastly, there is a half-decent mechanic where in order to pick up items you have to slowly lean down and grab the item, which can be interrupted by a ghostly arm grabbing you and dealing some damage. It's a cheap and manipulative move, especially since it is always followed by the same dramatic horror sting, but it is occasionally effective. 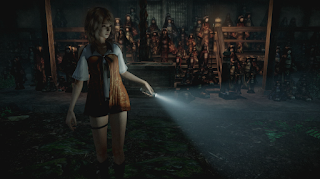 But while these problems should have crippled Maiden of Black Water into a barely functioning piece of interactive software, there are some things that even it out. The total abandonment of atmosphere and subtlety in favor of spamming enemies in the second half of the game is evened out by how plentiful healing items are. On Normal difficulty for every minor one healing item I used I found three more, and an extra life, and two major healing items. Some boss fights are actually very effective such as a shrine full of possessed dolls and the Maiden of Black Water which can instantly kill you if you're not careful. Finally, while the overall plot keeps starting and stopping as the heroes try to figure out why people are acting so strange (spoiler alert it's the mountain), the build-up and pay off of each level in of themselves do have some chills. It's a game that would have actually worked a lot better in an episodic model with more time to breathe and focus, as opposed to the padded twelve hour digital only experience we got.
Fatal Frame Maiden of Black Water could have been better. The gameplay helps salvage the meandering plot and bland protagonists, but pacing and progression issues make this one very difficult to recommend. If you haven't played Fatal Frame before, this interactive ghost story has some heart to it, but get ready for some very uneven and antiquated roadblocks along the way.

Looking back now, I still have a soft spot for this darn game. Nintendo always go out of their way to keep games in their catalog that adheres to their family friendly global brand, so every time they put something together like this or Bayonetta 2, it's a reminder that they do take risks and still try to better themselves. But that Maiden of Black Water can still go die in a fire!
Posted by DigiDesperado26 at 9:59 AM