Animation Deviation: A Personal Spotlight on Re: Zero 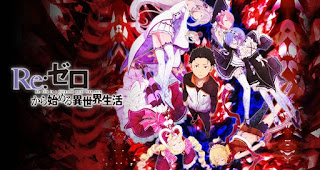 Finally! An Animation Deviation page that isn't me droning on about Samurai Jack!

Also quick addendum, that ending was brilliant and I will fight anybody who says otherwise.

Instead, I am here to give some personal opinions about animated shows or anime that have caught my attention for one reason or another. Why so scattershot? It's an aspy thing, and I'm weaponizing it for blogging!

But first, a very crucial preface about my feelings about anime and the anime industry in recent years. I'm no avid follower of trends of the industry, my flag is firmly planted in games media after all, but I do get a bit of my info from the YouTuber's Mother's Basement and Digibro, whom I mostly follow for confirmation or refutation of some of my assumptions from an outsider perspective. Otherwise, my following thoughts are purely anecdotal and should be seen as a personal lightly-informed opinion.

I've been of the mind that I have mostly grown out of the demographic for anime. Being a child of the 90s I loved the hell out of Dragonball Z, Sailor Moon, and Yu Yu Hakusho, and getting really into the stuff during my teens. Death Note, Rurouni Kenshin, Yu-Gi-Oh, that was my jam. But then high-school and college happened and very slowly I slipped out of anime.

A lot of it had to do with me becoming familiar with and sick of the various tropes of anime. The Shonen series' tendency for filler and convoluted plots and deus-ex machina super transformations. The abundance of fan service and shallow titillation of certain female characters. The glorification of various forms of entitlement by the main characters in various anime series. And of course, a heaping helping of terrible writing that bends over backwards to justify most of what I've written above.

Seriously, some of the most popular anime that the new generation are into absolutely pisses me off with how terrible they commit these crimes. Attack on Titan has maybe six good episodes in it before it divebombs into tedious inanity. Sword Art Online is ostensibly a love letter to games and gamer culture, but the creator didn't do any research into how MMOs operate or how gamer culture works, so it watches like poorly written fan fiction about a guy whose like really cool at games and stuff and he's got a hot girlfriend and he like totally beat like six MMOs cuz he was best ever and he's good at computers and he has an AI daughter and he's so hot that his sister kind of wants to sleep with him man. 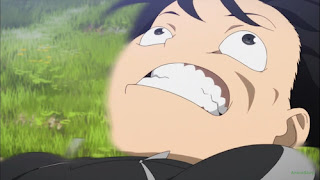 Gimme a second I think I need to vomit after writing that terrible run-on sentence.


I bring all of this up because there has been a concerted effort to observe and even subvert the very systemic tropes and memes of the various anime genres. Some of these I enjoy, some of these I wish would go further, but they are a collection of shows that have slowly brought me back to enjoying anime, both in their current form and in this new subversive style.

Which finally brings me to the topic of discussion in this week's column: Re: ZERO – Starting Life In A New World, aka Re: Zero.

The show starts off as a very generic fantasy adventure, with the protagonist being some nobody geek from modern day Japan getting flung into a fantasy world straight out of Dragon Quest. So what does that mean? Is he the chosen one? Was he summoned by a powerful sorceress to help them win some grand war because of his l33t video game skills? Did he die doing something heroic in the real world and for his bravery given new life by some benevolent god-like entity?

Honestly, that's where Re: Zero becomes kind of brilliant. I am roughly six episodes into the series and as far as I can tell, there was no reason. The protagonist basically got thrown into this world for no apparent reason.

But his very first thought upon entering this world was every single variation of what I mentioned above. And he's smug about it. This is the kind of character type I've really grown to hate in recent years. Not someone who just loves video games and geek culture, but makes it his entire life. Not in a proactive way like becoming a critic or PR guy, that I would respect, but a guy that works a dead-end job, stays locked away in his home and just subsists on games, Gundam models and a lot of porn while whining about how his life sucks and how this window to escapism is the only way he can feel important.

But, turns out he does develop a superpower of sorts upon entering this world, and it's the greatest curse I can think to level at this guy. Within the first episode of the series, the hero bumps into a girl sorcerer and goes on about how she is going to be important to the plot somehow and sticks around with her to get back something she lost. After some basic detective work they find a shady house in the slums, where our main character... gets eviscerated to bloody pieces. And the series doesn't treat this in a flippant hyperviolence as slapstick kind of way either. He suffers, holds on to dear life and then slowly chokes to death drowning in a pool of his own blood. 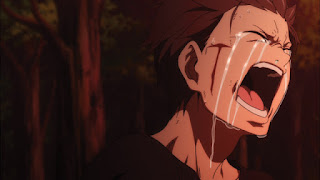 And then he wakes up Groundhog Day style a day earlier wondering what the heck happened.

That's right. The guy who thinks by shear virtue of being a regular modern day gamer being thrown into a fantasy world will go on to become its savior gets a big old freight train of reality slammed into him but with a Dark Souls-esque twist.

Except it gets worse. Even if he just keeps his head down and does nothing, certain days will repeat anyway. He effectively is being forced to put up or shut up using various mechanics that are a shorthand for him, but turned into its darkest most psychotic extreme.

This isn't to say the show is perfect. The first few episodes do a decent job showing off the hero taking advantage of some of his modern paraphernalia, at one point he tries selling his smart phone for a bag of gold just so he can eat something for example, but at the same time his smugness can get pretty insulting. Also, until the death loops start happening and more gets unveiled, the anime itself is very by the numbers no matter how many times you can hear it ironically rolling its eyes. There is also still some pretty blatant bits of anime cuteness, the biggest offender being the maid twins, but that's small potatoes. 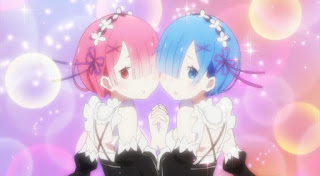 However, in terms of premise, slapping the taste out of the mouths of certain hopeless shut-ins with the very fantasy they crave is something I find deliciously sinister and quite cathartic from the perspective of a low end games journo and critic who winds up dealing with them on bad days.

It is currently available to watch on Crunchyroll and I sincerely hope you give it a look if any of this sounds interesting.

I mean what else is good to watch until the next JoJo comes out?
Posted by DigiDesperado26 at 1:23 PM