Sidequest Corner: How The Platform Affects The Experience 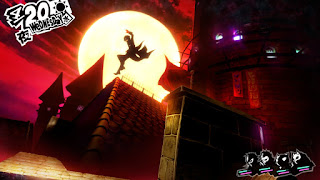 As I casually mentioned in my last post about how April Fools Day Rick-Rolled Me – no I am not apologizing for that pun – I got a review copy of Persona 5 by the lovely people over at ATLUS. While I am still working on my review of the game for The Game Fanatics, I even wrote a hot take on the game's opening, I actually found something unusual about my predicament with this installment.

I don't mean the gameplay or the visuals were off, I'm talking about the delivery method of the game's challenge: level grinding.

The Persona games have a lot of grind in them. For the longest time that was its biggest draw. Dropping into a bunch of similar looking rooms and corridors and systematically clearing them of enemies and loot. This is mostly due to a high difficulty curve when it comes to the battles, so it's always good to just blast through a bunch of opponents to get yourself stronger.

It's also important to note that almost all of the Persona games are available on handhelds. Personas 1 and 2 debuted on the PS1 but came over to the PSP. Persona 3 got a PS2 release but then got remixed and re-released on the PSP as P3P: Persona 3 Portable. Even the crown jewel of the franchise that has a dungeon crawling spin-off, a rhythm dance game spin-off and two fighting game spin-offs to its name, Persona 4, got a release on the PlayStation Vita as Persona 4: The Golden. 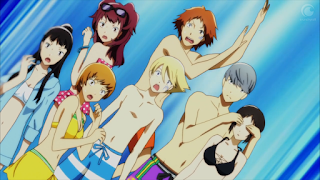 The reason why these two items are connected is a concept in media known as abnegation. Although the textbook definition of the term involves renouncement or rejection, a refusal to act, it is also been used in popular parlance to basically veg out. You read a trashy paperback after a long day. You put on a completely inoffensive TV drama on cable just to have some noise. Flip on the radio and listen to some generic pop music. The list goes on. You want to engage in something but are either mentally or physically exhausted to put your whole into it so you go for the equivalent of popping bubble wrap.

And in RPG terms, blasting through hundreds of weak or somewhat challenging encounters in order to slowly improve your party's stats is just like going to town on bubble wrap. It's easy, it gives a sense of accomplishment even if nothing has happened in a narrative sense in the game, and best of all it's easy to just pick up and put down at any time.

Like say with a handheld while you're on a commute to work. Or you waiting for a food order to be prepared.

Which brings me back to one of the biggest changes to Persona 5: its dungeons. As mentioned before these levels were originally simple stretches of rooms and corridors full of treasure and foes, and it was tailor-made to be ploughed though in a daze. A portable experience can be opted out of at a moment's notice after all. But the dungeons in Persona 5 are massive well-designed labyrinths of consistent level and architectural design. Sprawling castles, overbearing banks, the list goes on. Furthermore there's a greater emphasis on stealth and infiltration, making the game play closer to Metal Gear Solid than Final Fantasy.

But the high difficulty curve and the need to level grind remains.

And here is where some dissonance is felt. There is basically a dedicated grind zone in the game referred to as Mementos, a long collection of corridors and floors full of enemies and loot. But I'm not playing Persona 5 while on a bus or during a long trip, I'm playing it on my television. A television where I could be watching Netflix or catching up on shows people keep recommending to me. If I'm going to play on the TV I'd want my games to have the feeling of less fluff to them.

Which leads to me wanting to get to the next dungeon... which becomes a chore because the game still wants me to level-grind in order to meet its high expectations of competence. 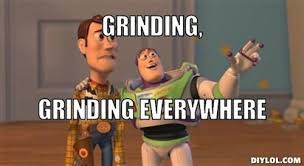 And contrary to popular belief, I don't spend all of my time playing video games in this psuedo-profession. So no, I can't dedicated north of seven hours to just “git gud” as the chuckleheads would say.

This is absolutely not a knock against Persona 5, I'm just simply writing to show how much can be forgiven when it comes to certain level design or even certain people's experiences in gaming based on something as simple as platform.

I mean I love Metal Gear Solid to death but it just doesn't seem right playing it on a handheld.
Posted by DigiDesperado26 at 5:49 PM