You know it's getting very tiring just saying these episodes are great over and over right?

I've just been informed that I'm contractually obligated by Nondescript Corrupt Evil Megacorporation That Pays The Bills Inc. to continue this column of Animation Deviation by threat of the closing of the Cybertavern and subject to painful torture and death by something called a “Lemon Demon Cuddle Party.” I don't know what that last one is but I don't want to find out.

So episode 4 of the return of Samurai Jack actually addressed an issue I brought up in the most recent episode of That Random Podcast Show. The temptation to maintain a moody and atmospheric show that prides itself on adept visual storytelling while also giving its protagonist the opportunity to emote and fight with his personal mental demons without it turning into an animated fantasy Mad Max knock-off. Talking with a former version of himself was appropriate in the last two episodes to contrast what Jack was to what he had become, but there is only so many trips to the Going Mad From High Expectations well you can make before it becomes stale.

Case in point, the episode's very first two minutes. Jack recovers from his last major encounter with the Daughters of Aku. He even finds out dead from a combination of fatal wounds and the long fall they had. As established before in the last episode, Jack recalled that the bushido code taught to him by his father still allows the slaying of human beings as long as they are given the opportunity to walk away, everything else after that being self-defense. But this still doesn't stop Jack from believing he is being judged, in this case by a literal murder of crows cawing “murderer” at him in cacophonous glee.

Jack then proceeded to yell at them that she chose her path and moved on. It was brief and it was a callback to the last episode, but it also shows there is still some level of discomfort with the idea on Jack's behalf after entire decades of fighting robots. 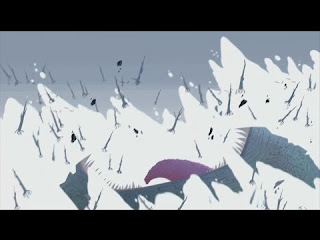 But then the meat of the story begins where the last of the Daughters, Ashi, is still alive and continues her attack on Jack.

The result is probably the closest this season has gotten to a full on comedy sketch. She keeps going after Jack like a rabid dog, screaming about how Aku is total MLG and Jack is poser trash – note to self get slang body modification checked out – while Jack just casually knocks her away while getting her to see how false her idol really is.

Then a giant monster breaches the ground and eats them. Ashi even continues trying to kill Jack while they're being sucked into its bowels. Yes he even lets out an “are you freaking kidding me?” reaction to the absurdity of it all.

Leave it to this show spending two episodes showing just how deadly and efficient the Daughters of Aku are only to have their last surviving member turned into a parody of itself and make it seem natural. Though this is in part because its paying off some set-up back in episode one during her extended training montage.

From here the episode turns into....a neon colored riff on The Fantastic Voyage with a mix of Edgar Rice Burroughs. Even while Ashi is basically tied up and hostage to Jack, chained up by the remains of her kusari-gama, she still tries to trip up Jack while he's fighting off the monster's immune and digestive systems while pulling off his best John Carter of Mars impression. Seriously he gets sprayed with blue blood while using the severed leg of an insect monster as an improvised blade and it's just as awesome as it sounds. 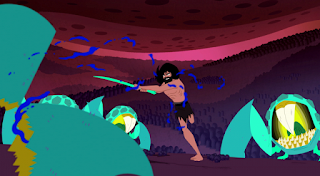 It is here that the meat of the episode lies. Jack and Ashi are literally in the belly of a large beast and for Humanities majors out there, the metaphorical Belly of the Beast section of The Hero's Journey. In the case of Jack, it is arguing with his common sense to try to redeem Ashi, by trying to undo her programming, which of course means more of Ghost Jack but in an even more diminished role than in the last episode, complete with some moments of self-reflection as to how this can be a window to some new hope for him and his journey. As for Ashi it is her coming face to face with a person she was raised to hate, despise, and told to kill, despite everything from his actions and his compassion being not actively hateful or heartless, putting her world view into question which manifests as internal conflict and seething angry confusion. This is all framed around them traveling through the unknown insides of a leviathan looking for an escape. 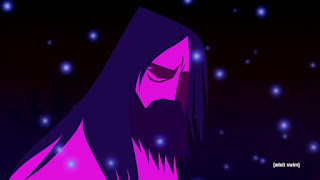 Starting to see the pain in trying to find anything wrong with this episode's second half? It has a comedic start with a montage of Ashi not shutting up about the glory of Aku while Jack takes it all in stride, but then things settle with the aforementioned meditative sections. We get some inventive action where Jack is not only fighting off monsters but Ashi's passive-aggressive interference. There's even some solid and succinct dialogue between Jack and Ashi showing that Jack hasn't completely lost his ability to socialize juxtaposed with Ashi's total lack of the practice. Also, once again the art direction is just beyond gorgeous, mixing together biological imagery like blood vessels and digestive enzymes with serene deep sea wildlife is equal parts soothing and haunting.

The crown jewel of course comes at the end where the two escape and enjoy their freedom on some sandbar out in the middle of a vast ocean, with Jack gaining a new ally. 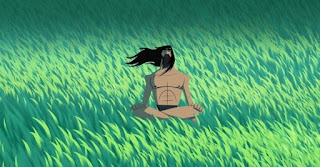 So yeah, episode 4 ends with a major villain getting an alignment shift by Jack re-embracing his selfless nature, a side of him I've been waiting to see for a while and it was worth the wait. This is even hinted at with the Ghost Jack interaction in this episode. While episode 2's scene was aggressive, antagonistic and defeatist and episode 3's scene was surreal feral and warped, episode 4's dialogue is very casual, almost like two friends finally catching up after a long time apart. Normal Jack remembered why he is still fighting the good fight, and Ghost Jack – his literal manifested ideals and samurai code haunting him – claiming it would be better to just leave Ashi to die. It's a subtle but powerful swing of power and volition that is all expressed in body language and some sparse dialogue.

Episode 5 teases the great lord of darkness Aku putting down an insurgency of some kind, which of course means more of Greg Baldwin and some creative shapeshifting mayhem. Can't wait, and I'll see in the next one!
Posted by DigiDesperado26 at 1:09 AM