I've really enjoyed myself. Had smoked ham with the family, got myself into Yooka-Laylee and Cosmic Star Heroine, both alright and pretty great so far, and of course kept myself sane by avoiding political talk of any kind. Yes, I am aware that very stance itself can be considered centrist in nature but shut up I don't like being stressed at all times.

Oh yeah and I guess according to the title I'll have to dissect the latest episode of Samurai Jack.

Once again it is freaking insane just how much detail and mileage Genndy Tartokovsky has gotten out of this revival. Just when I think there's a scene, moment, or sequence that goes nowhere or retreads old ground, it all somehow holds up, even from episode to episode.

Even something as simple as Jack getting a companion that he is helping pull away from the dark side could have easily come off as condescending and off-putting.

Just imagine if this show was trying to be modern and edgy instead of a solemn and quiet show.

“I shall kill you Samurai. My entire life I've been taught that Aku is the greatest force in the world and you're nothing more than scum trying to destroy the paradise he has built.”

And then Jack suddenly has on a flannel shirt and square-rimmed glasses as he whips out a PowerPoint Presentation and starts with a dreaded, “Well actually....” before painfully mansplaining in a backhanded tone to a CHILD SOLDIER the true nature of the world!

After the last extended episode being Jack stubbornly protecting a woman that was trying to kill him at every turn while inside a giant monster, ending with the would-be assassin realizing he isn't evil incarnate, the next episode picks up this plot threat.

But only after a five minute prologue where someone thought it would be a great idea to rally together an army of troops and try to storm Aku's hideout.

And who would be so bull-headed and reckless as to put together such a suicidal effort? Why the boisterous and stubborn fan favorite, The Scotsman! Wielder of a magic sword powered by Celtic runes, owner of a machine gun grafted to what was left of his left leg, and bagpipe enthusiast. 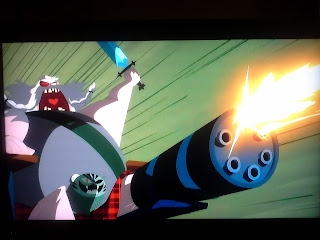 However since he doesn't have the luxury of never aging like Samurai Jack, The Scotsman is stuck in a wheelchair, his machine gun now replaced with a mini-gun, wearing a plaid eyepatch and rocking a Gandalf-level beard and hair line.

As for his army, it's made up of a bunch of poor souls in tanks and about six dozen warrior women, all of which are his daughters. Because Scotsman is just that awesome!

Then Aku shows up and devastates the army in about ten seconds and forces them to route.

Scotsman tells his daughters to run, buying them enough time to escape, as he fights off Aku.
Which leads to one of the best moments ever by the Scotsman and this show ONCE AGAIN sidestepping grimdark tropes.

The Scotsman faces down Aku, the all-powerful master of evil borne of primordial darkness from the creation of the universe, and proceeds to call him a giant baby. Scared to death of how Jack is still running around and keeping hope alive against his oppressive rule.

Aku responds by vaporizing Scotsman into ashes with laser vision then returning to his tower. 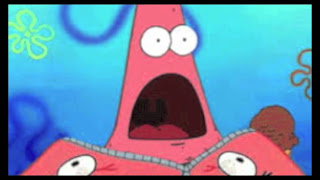 It was at this point that I sincerely believe Tartokovsky had finally made a blunder. One of the most hackneyed ways you can try to up the stakes in a gritty or dark reboot of a beloved franchise is to kill off a beloved character to show how things are totally for keeps now. Despite the show being all about Jack, The Scotsman was a great foil to his seriousness. And as stubborn and angry as the Scotsman was, he wasn't an idiot. Charging in when he knows Aku can only be killed by certain weapons was certain death, a surefire way to piss off fans of the character.

But then Scotsman's ghost comes back Obi-Wan Kenobi style thanks to the runes of his sword held by his daughters. In his prime, and able to speak to his children. His orders? To make a bigger army and find Samurai Jack to lead them for a true final conflict.

So now instead of a character death, it's set-up for what I have to assume will be the season (and series) finale: A grand battle to topple Aku's stronghold made up of Scotsman's battle maidens with Jack and Ashi leading the charge.

But of course there is still about twenty minutes left of episode to go so it decides to focus more on Ashi and Jack's budding friendship. 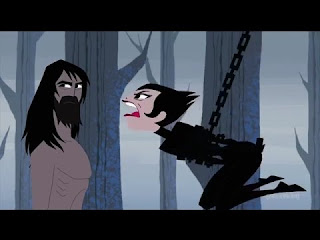 It is here once again that a lot happens and a lot of bases remain covered. Ashi is still fighting with her conscience, informed by her training from the Daughters of Aku, and Jack has to show her the truth. And since this show is more about showing than telling, we get just that. Jack actually opening up to Ashi about what he knew of the world, his past and his upbringing. There's even a beautiful sequence where he recalls a fairy tale his mother told him about the creation of the stars.

As for Jack's madness? His despair? His hallucinations? They pop up once but or almost immediately silenced, since Jack actually has someone to talk and emotionally engage with. No Ghost Jack appearance in the entire episode!

As for Ashi becoming “woke” – I think that's what the kids are calling it these days – this is all done through powerful visuals. The devastation of a forest by Aku's corruption save for one tree still holding on. Aku's cities taking in alien warmongers and criminals looking for refuge and “giving” them the land of weak or defenseless people.

What could have easily been a lot of exposition and a lot of padding is covered in a few short minutes. But then the major conflict of the episode kicks in. An old village is devastated but Jack and Ashi find a survivor who tells them that Aku's minions had stolen their children and have taken them to a labor camp.

Yep. Jack and Ashi are going to break kids out of a labor camp. Bet Aku has a bunch of sympathizers that deny they exist as well the damn cretins.

But things take on a more sinister turn as it's revealed that the children aren't being used as a work force, but as soldiers. Turned feral by chips put into their skulls and are activated by a certain sonic frequency. This leads to Ashi looking for the control panel while Jack runs for his life from killer children. Did I forget to mention he still hasn't gotten any new armor or weapons since his fight with the Daughters of Aku? Well he hasn't. And he doesn't want to hurt children.

This leads to the climax of the episode where Ashi is captured by a sadistic torturer and is electrocuted while she is forced to watch Jack slowly get worn down by the weaponized toddlers. The torturer even delights in how easily manipulated children are and how easy it is to condition them to kill. Almost as if he's trying to drill home a character arc for Ashi while also being disgustingly indulgent with his job. Of course Ashi escapes capture and beats down the torturer and turns off the device and saves the children.

Except that's not what Jack sees. He sees a bunch of children scream in horrible pain then collapse, their bodies not moving. 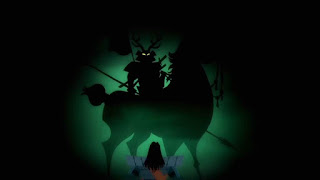 It is here that Jack finally addresses and confronts the spectral horseman. It simply says in an ominous voice that is finally time, to which Jack agrees. And the episode ends with Ashi helping the children wake up, but slowly coming to the realization that Jack has vanished.

I was loathed to bring him up in previous episodes because despite how ominous his appearance is, there was no clear indication as to what it is. Almost every time Jack hallucinates or has a crucial moment of severe self-doubt or depression his visions include an ominous horseman. Always in shadow with no real major features given. There have been countless theories as to who he is or what he represents, but none have really stuck in my mind.

Except now I have a theory. The horseman is Jack's depression, his despair made manifest. It appeared when Ghost Jack was convincing him to commit harakiri. It appeared in episode one when he saw the ghosts of his loved ones accusing him of abandoning his sacred quest. And it appeared again when Jack believed he didn't save a bunch of innocent children despite all of his efforts.

Teasers for Episode 6 of the show seems to show Ashi looking for Jack, and what appears to be allies protecting him while he is gone. Hopefully we'll see if I'm right or not when that comes out next time.
Posted by DigiDesperado26 at 10:25 PM