On reflection hitting Commander Shepard with a mental bombshell after what he went through on Virmire was not the best decision I could have made.

While the facility's primary function was to crank out krogan shock troops completely Genophage-free, it was also a testing ground for Sovereign's indoctrination ability, to bring in even more people under his influence without any obvious and intrusive cybernetic mutilation. Shepard and the others left them to their fates, although from the reports and footage I saw captured by Tali and Captain Kirrahe of the STG they were either unresponsive or comatose. Poor souls.

It also didn't help that Shepard found another intact Prothean Beacon in the facility and got more of their knowledge beamed directly into his brain, with Dr. T'Soni helping him make sense of it all.

There is also the fact of what Shepard also discovered on Virmire. Sovereign most likely explained it to him in a condescending tone but it's still haunting nonetheless. The entire Milky Way Galaxy has an entire network of Mass Relays, large structures that ships use in order to blast at much faster speeds to reach other systems. I wasn't being flippant when I described them as an intergalactic highway system. But while the galaxy as a whole think the technologically superior Protheans created them, the truth is they're about as old as the Reapers. Worse still, their entire placement in the galaxy is to help facilitate the growth of a galactic civilization exactly to the specifications of the Reapers so when they arrive once every fifty-thousand years they can efficiently eradicate the population. And the key is the Galactic Citadel, the very center of power, would be how the Reapers would come through to begin their harvest from their safe abode in dark space. 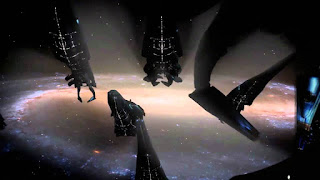 The most widespread means of travel for this entire galaxy is actually an intricate spider web. Worse still, the Conduit that Saren has been looking for this whole time will help call the spiders.

So in anger I just slammed an elite military commander with at least three textbooks of existential dread weighing on him after he got away from a near death experience, left one of his soldiers and untold innocents to die, and had more nightmare fuel of an advanced alien race being wiped out by all-powerful sentient machines forced into his mind.

Alright, I think that definitely makes me disqualified for a medal. In fact it seriously puts me on the docket for some legitimate jail time. And a second opinion on the whole sociopath thing.

The worst part of it is Shepard finally figured out the origin point of all of his visions: the lost Prothean world of Ilos. A planet whose system is accessible through the Mu Relay. The origin of the Conduit. We could finally end Saren's plans. And I finally had the opportunity to try one last big plan to make things right.
And yet all of us are stuck on the Normandy. Locked down on the Citadel because Shepard brought all of this up to the Council. Their response to finding out about Saren's plan was to deploy an entire fleet to the Mass Relays leading to the Mu Relay and then put the entire the rest of the fleet on standby at the Citadel itself, including the Council's own flagship the Destiny Ascension.

To be fair, it's a miracle his brain wasn't fully reduced to pudding when he told the Council, and they still haven't fully bought the admittedly ludicrous story of thousands of genocidal large machines heralding doom. But they do know how big of a threat the geth are and just how dangerous Saren can be, so they split the difference with mobilizing the fleet and then docking the Normandy; it's focus is stealth and recon, not war.

But I was still fighting tooth and nail to get our butts to Ilos.

The fleet wasn't going to be enough. Everyone on the Citadel was going to die. And the Conduit isn't the only thing of value that Ilos holds.

It took some convincing but I did manage to get some of the crew behind me. The plan was to leave most of the team behind on the Citadel to keep up the appearance that we were on shore leave while a skeleton crew remained on the ship. The Council's ambassadors would arrive on the Normandy in person for a final debriefing on Commander Shepard's mission with Saren. The plan was to allow the council onboard the Normandy due to Shepard's less than stellar mental state, and then before they depart get the Normandy out of lockdown and take off to Ilos with them in tow.

It would just be me, Shepard, Jack, and Tali going into the unknown, with at least several different war crimes and what can easily be construed as high treason trailing behind us.

Everything was in place and about to go off. I just had to check on Shepard. We needed our leader after all.

I headed to his quarters but stopped before entering. The last thing he'd want to see would be an asari trying to comfort him after everything that happened. But this had to be done, the galaxy was at stake and despite how much I've learned, I'm not a hardened military commander.

I took some deep breaths and steeled my nerves for the worst, then opened the door.

Commander Shepard looked up in shock from his bed, Liara next to him topless and trying desperately to cover herself with the sheets. I immediately looked away in embarrassment.

“Sorry! I'll come back later once you're decent,” I blurted out while trying to close the door again, “but just know that it's important!”

Alright how the hell did that happen behind my back? Of all the things I showed Shepard in the mind meld, I tried to omit too much romantic intention. There are certain things you just don't impose on a person and who you are supposed to fall in love with is one of them.

Still, it made a certain level of sense. Liara does harbor a certain love for the human race, how much progress they make and how confidently they do it in such a short amount of time. Short by asari standards of course. And Shepard has effectively coordinated the resolution of several major catastrophic incidents, and prevented terrorist attacks, all while chasing after a rogue Spectre and trying to prevent galactic extinction. In the span of about six months.

Then he vanishes into his room, probably crushed by the weight of it all. And asari are naturally maternal....

As I was mulling that over I saw Dr. T'Soni leave Shepard's room dressed in her lab coat again, her face a flushed dark blue. She threw me a quick look of persecution, but I just gave her a genuinely warm smile back.

“Nice to see you found someone, doctor,”

She shot me a small smile before speed walking back to her lab.

I knocked on Shepard's door just to make sure he was decent, then stepped inside.

There was an uneasy pause.

“Hey,” he responded back.

Truly, I am a master of conversation.

I cleared my throat and tentatively walked towards him.

“Look, Shepard. I'm sorry. All of that was my burden to bear. You shouldn't have-”

“Variza, it's fine.” He interjected.

“You're...fine with being shown how your life will go?” I asked, puzzled.

Shepard sat down at a desk near the wall then turned to face me.

“What was the name of my friend that I lost at the battle of Akuze?” He asked, his face like steel.

I was utterly confused. Akuze was a battleground that Shepard was a part of. The sole survivor of a mission gone wrong when a Thresher Maw tore apart his unit. But his friend?

“His name was Flint Adams. Had a wife and two kids. We got a long well enough on shore leave. We even said once the mission was over we'd go biking together back on Earth. I attended his funeral after the Alliance found me.” he looked away every once in a while, his hand noticeably tensing. It was definitely a strong memory.

“I'm sorry” was the best thing I could respond with.

“So you don't know everything about my past,” he responded and got up.

“Here's another question then. If everything you showed me is set in stone, why did our encounter with Benezia and Virmire go so differently?”

Shepard then clapped a hand on my shoulder and actually gave me a genuine smile.

“Do you hear me complaining?”

“Let's just say I needed that reminder that sometimes there's more than just the mission.” he said, reading my face.

He extended his hand and nodded for me to take it. I didn't hesitate, his grip solid and firm.

“You do realize that I'm planning something highly illegal right now in order to save the galaxy right?”

“I'm not that surprised at all.” he said with a chuckle, “need some help?”

It went off without a hitch. The Council Ambassadors raised a stink about basically being taken hostage, but by the time they tried to hail the fleet to reduce us to scrap we were long for the nearest Relay out of the system. After that it was a matter of getting the Mu Relay through both Saren and the Alliance's fleet. Thank the goddess for the Normandy's stealth drive and the the giant armada-sized distraction.

Note to self, I may have taken Shaira's lessons about asari culture I little too well. 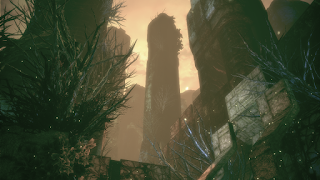 We got into orbit around Ilos, but the bombardment by Saren's fleet was too much for a precise landing at the location of the Prothean ruins. Joker suggested a near suicidal orbital drop of the Mako rover with us inside it, taking the Council with us. I had a much better idea....

With some adept piloting by Jack, our Kodiak shuttle breached the atmosphere of the planet and got through some additional anti-air blasts by some Geth Colossi. We hit the dirt hard and were on the ground within seconds.

Just in time to see Saren and a squad of Geth Prime enter some sort of ancient elevator in the Prothean Ruins, two large stone doors closing behind them.

I barked at Jack and we both sprung into action. Throwing our biotic power at the doors keeping them ajar, Shepard and Tali moving to cover us from geth plasma fire.

Good news, I was starting to keep pace with Jack in terms of strength and endurance. Bad news was these ancient doors were clearly built to withstand bunker busting bombs. We had maybe ten seconds tops before those doors would close. Thankfully, we had a quarian engineer on hand, and she is amazing under pressure.

I'd honestly explain the physics and calculations she underwent in order to get the wedge in the door just right, but frankly that's why she's a genius in her field and I'm not. We slipped into the elevator, and the Council was coming with us.

“By the spirits, Shepard what is the meaning of all of this!?” The turian head demanded.

“If we survive all of this, our first act is to remove you from the Spectres and have you court martialed!” The salarian dalatrass exclaimed.

But before the asari councilor could get a word in, the elevator reached its destination.

“Key'lah. What is this place?” Tali gasped. 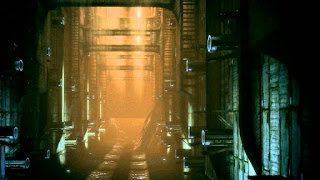 “You're looking at the resting place of the last of the Protheans, the remains of their scientific initiative.”

“What are we looking for?” Jack asked.

“Two things. A still functioning Prothean VI program. Shepard should be able to understand it thanks to all the Prothean stuff kicking around in his skull. It'll tell us about the Conduit.”

“and the second thing?”

“The plans for something called the Crucible Project.”
Posted by DigiDesperado26 at 1:48 PM