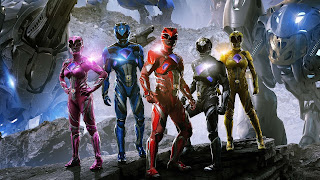 Don't worry, we'll get to the Samurai Jack review soon but I just want to take this moment to bring up a semi-recurring post that will be recurring here at the Cybertavern.

As I mentioned before, I do lean towards progressive inclusion in all media, mostly from a desire to see interesting, or at the least unconventional creative expression happen in said media. This is a place where anyone can take their mind off of things after all. But sometimes that can lead to tokenism, a piece of crap with one person who identifies as a tree is still a piece of crap after all.

So I like to take this opportunity to bring up some good examples of diversity that has come to my attention recently and whether or not I think it's good representation.

Our singular topic for the day is found in the recently released Saban's Power Rangers directed by Dean Isrealite.

I saw this movie late Thursday night in order to record a movie review with YouTuber Zafmod and my opinions of the movie as a whole were made clear there.

But then I got to know the new versions of the Power Rangers. If there is one absolute strength this movie has, it's that the main heroes are all interesting teenagers with noticeable and understandable problems and issues. Much like a more traditional slow boil superhero movie, they don't immediately suit up and fight the bad guys, but learn to grow as people and get to actually live out the central theme of the movie, “that having friends can make even the darkest of times bearable.”

Zack is a rebellious hoodlum because he is a caregiver for his mother who is bedridden with an unspecified illness. The new Trini is obviously LGBT, clearly queer in some regard, and it manifests as her acting out against her more conservative family. Jason and Kimberly...are probably the most normal of the bunch with backgrounds coming from squandered sports stardom and bullying respectively. 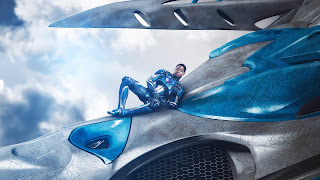 But the absolute breakout star for me had to be actor RJ Cyler's protrayal of the Blue Ranger, Billy Cranston. As a fan of the original show I remember liking the Blue Ranger. His weapon being a staff, his Zord was triceratops, but he was also the techie of the group. Even when Billy wasn't a ranger anymore he kept helping the team with new gadgets and vehicles to continue the good fight.

I've also made it perfectly clear to many of my colleagues and peers that I was diagnosed with Asperger's Syndrome, which is on the low end of the autism spectrum. Let me tell you, having this diagnosis in the 1990s was pretty much torture, social awkwardness and all. It is not as big a deal anymore, adulthood tends to help make the most out of the gifts we are given after all, but it is still depressing to know terms like “autistic” or “aspy” are used as insults. I say depressing because I can't club said people to death with something, but I digress.

Then I found out through pre-movie buzz that this new version of Billy would also be on the autism spectrum, and I started getting really worried. Why? Hollywood has a TERRIBLE track record of doing proper representation of people on the spectrum. Either they're the butt of jokes like Sheldon on The Big Bang Theory, an offense that's only gonna get amplified because they're making a spin-off now focusing on that character's childhood, or they're used in the most contrived predictable way imaginable: as deus ex machina.

The biggest stereotype about those on the spectrum is that they're intellectually brilliant due to lateral or unconventional thought patterns but can't socialize with other people worth a damn. And for the most part, this is true. But whenever this is utilized in film or television, it's usually as a short hand to give a character silly quirks and plot convenient knowledge. The examples are too numerous to list and they're all uniformly insulting.

The only films in recent memory to even remotely portray my people justice was Ben Affleck as the lead in The Accountant, although that is by reputation as I have yet to see it myself, and the dark animated film about long distance pen pals, Mary and Max. Seriously, you want a basic but approachable insight into those on the spectrum, find the time to watch Mary and Max.

As for this new Billy in Power Rangers, I absolutely enjoyed how they handled him here. He has a certain amount of neurosis and a focused group of hobbies which is shown in several scenes where he has a workshop dedicated to old spelunking expeditions he had with his departed father. He has trouble picking up on social tells and body language which manifests as awkward dialogue with the other characters. His lack of socializing even shows up when he's talking to himself in small bursts, usually to calculate or think outloud. He also uses his grab bag of esoteric knowledge in order to figure out the location of the MacGuffin that Rita Repulsa is after, all with previously established ticks and character traits.

But that's a standard portrayal; what makes this Billy stand out? Well, it's a strength of the movie that these characters spend a good long time getting to know each other. There's a brilliant scene around a campfire where Billy opens up to the group and brings some much needed humanity to the part. How he doesn't need to be in his isolation anymore and cares about the team as friends.

This is important since too often an autistic character can easily just turn into a tool for hackneyed writers. “Hey, aren't you really obsessed with this singular topic cuz your brain is weird? Let's set up an obvious Chekov's Gun and have it pay off in the third act because you aren't really a person.” But Power Rangers actually allows Billy to progress with his condition. Not lose his gifted mind by coming out of his isolated bubble, because that's not how that works. Nor is it seen as something he despises like a superiority complex, like...Sheldon from TBBT.

Also, some of the humor comes from Billy but not at his expense. It's easy for some to forget that just because you seem incapable of basic interactivity doesn't mean you aren't self-aware, and Billy has several jokes that come from his perspective. He isn't awkward with it either, in fact there is an entire emotional climax that focuses on him taking his place as the heart of the team that absolutely got me pumped and invested.

All of this from a cynical studio-created grab for my wallet through my nostalgia.

Autism isn't a disease, nor is it being like a mutant from X-Men, it is the neurological equivalent of Munchkinism to borrow a DnD phrase. You're brilliant in focused skills and knowledges but your Charisma and social skills are below average. Only by progressing in this game called life do you learn to rebalance or deal with this hand you've been dealt.

So today in diversity I want to give a shout-out to the new Billy Cranston from Power Rangers, a surprisingly well-researched and amiable representation of an autistic person in film.

I have just read that sentence again and wow, what a time to be alive.