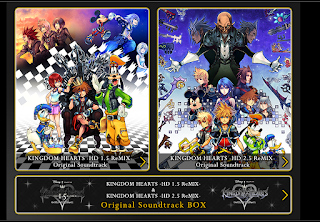 If you have no idea why I'm doing this here instead of on Saturdays, you got some reading to do suspiciously new face here at the Cybertavern.

As for everyone else, welcome back to my semi-coherent essays about games and game design. And as the title implies I am here to talk about Kingdom Hearts, the surprisingly lucrative and enduring JRPG franchise brought to us by the biggest name in Japanese RPGs, Square Enix, and the all-consuming force of progressive family friendly values that is the Walt Disney Corporation.

As of yesterday, the entirety of the Kingdom Hearts games are easily accessible on PlayStation 4, which finally gave me the excuse I needed to roll up my sleeves and dive into roughly eight different large time sinks to figure out how the hell this thing has such a fan base and why people are losing their collective shit over Kingdom Hearts 3 finally coming out some time in 2017 as announced by Square Enix. Which translates to some time in 2020 but only after a bunch of delays and stuff because Square Enix can't keep its PR mouth shut!

So Kingdom Hearts is a truly odd duck of a game series from an outsider perspective. At its most basic level it's the story of a hero named Sora who gets wrapped up in a massive adventure where he has to fight off against the forces of evil as they slowly attempt to take over the world. And along the way there's the usual JRPG trappings such as the hero learning about the power of friendship from the people he meets along the way, a lot of existential angst over an uncertain future, and large over-the-top scenes of melodrama.

It's just that the characters and locations that Sora happens to meet and deal with are a combination of various characters owned by Disney like Donald Duck and Mickey Mouse, and various cameos and appearances by certain heroes and villains from Square Enix's Final Fantasy series.

It starts off simple enough, but as Honest Game Trailers satirically highlighted, it got very convoluted very quickly.


It says something that I have to consult a wikipedia page to figure out where the hell to start on a series that has about eight games in its respective timeline. Games with titles like 358/2 Days or Re: Coded, because apparently numbers are overrated.

But this does beg the question: what about the longevity of the installment that started it all? Does Kingdom Hearts 1 still hold up?

Well on a pure gameplay level by modern standards... not really. The first Kingdom Hearts came out during the PS2 era in the 2000s, which was a largely experimental era when it came to action-RPGs. A lot of developers were experimenting with how to maintain the narrative and character focus of a traditional RPG while making the combat more engaging and palatable to a more general audience.

A more general audience that is turned off by obsessive number crunch and multiple menus. As much as I love me some complex numbers and neurotic optimization, some people do that sort of stuff for a living and they'd rather just get right to the point.

To this end, Square Enix decided to make the combat of Kingdom Hearts very straight forward. You run around attack your enemies, and you map your spells and special attacks to shortcut commands like you're playing a fighting game. But there's also some menu management when it comes to using items in order to keep your party members alive.

In practice this is a bit of a mess. On the one hand it makes fighting through low level minions quite exciting since it's more like a warm-up for a bigger fight than another tedious display of just spamming the “Attack” command again. On the other hand it leads to some stilted and awkward boss battles since they have to balance the logistics of an action-platformer, the hitboxes and hit detection of a high-end hack and slasher, as well as be a test of party management, healing item management and special attack usage. 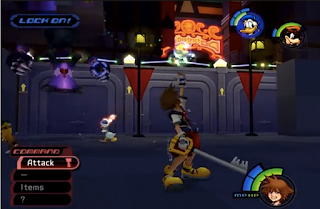 And without the rose-tinted nostalgia glasses on, it's very clear ambition outweighed reality. Frustration from obtuse controls, dodgy AI, tedious fights, the list of annoyances goes on.

So the core engagement of the game, the combat is a noble failure by juggling too many balls in the air, what about the other major form of engagement that an RPG has?

Believe it or not, mixing together the standard JRPG tropes like the naive youth going on a big adventure, childhood love interest, and the older rival with some trademarked Disney whimsy somehow hermetically seals these ideas; making them seem fresh and original even though you seen it hundreds of times before.

Yes it can get incongruous at times. A cutscene can have Donald Duck getting slammed into a wall by an open door gag, flattening for comedic effect, then get mortally wounded in a boss fight. But at the same time when you have one of your major big bads be Maleficent and you have the likes of Goofy talking about needing to stay positive, it all somehow manages to remain genuine.

I have only played about three hours of Kingdom Hearts 1 so consider this post a long meditation and first impression on the game as a whole. On a technical level it suffers from the limitations at the time, some of the voice-acting is nails on a chalkboard, and the combat holds up about as well as the fashion career of Jinco Jeans, but there's an implacable charm to the whole thing that has me interested. 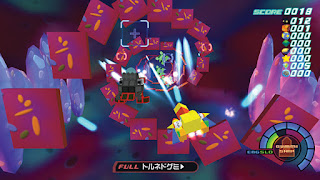 Now if I can just skip those ABSOLUTELY ASANINE RAIL SHOOTER SECTIONS I'D BE GOLDEN!!
Posted by DigiDesperado26 at 4:17 PM