Guess whose on hardware review detail for the Nintendo Switch? This guy! Don't worry cybertavern patrons you'll still be getting my thoughts in this week's Animation Deviation. But what better way to address International Women's Day than a showcase of some of the most inspiring and awesome ladies in modern animated shows. This is technically not a Top 10 or Top 5... because I said so.

Alright let's start things off with! 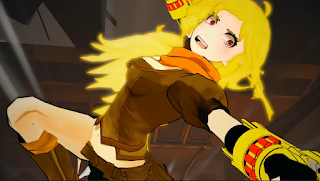 Rooster Teeth's animated action series is probably the best thing the studio has put out in recent memory and it's easy to see why. Taut worldbuilding, good characters, and the kind of tone that embraces equal parts fantasy and pulp schlock with hyperstylized anime sensibilities.

But in terms of the main cast, I have to give credit to the blonde bruiser, Yang Xiao Long. She's well-rounded, has a pun-filled but endearing sense of humor, and has a clear passion to seek thrills as well as protect her sister, her family, and her home from the threats of the Grimm.

And there's the fact that the power manifested as the purest expression of her soul is the ability to take any sort of damage she suffers and use it to amplify her own strength. That is empowerment and confidence to an amazing degree. There's also the fact that she fights with shotgun gauntlets, which for my money is the most ludicrously cool thing ever.

But what puts Yang into a spot of consideration at the Cybertavern is the entirety of Season 4 of RWBY. I will not spoil the major beats, but it takes guts to have an entire series that is known for action sequences and humor to dedicate an entire season with one of their most aggressive and likeable characters... process and deal with trauma, PTSD and being physically crippled.

Empowered, confident, determined, resilient, and just a fun girl to have around, Yang Xiao Long here's to you.

I seriously could not pick between any of the main cast of Steven Universe so consider this a three (five?) way tie for my spot. And honestly I don't think anyone will blame me considering all of the topics, themes, and fantastic character moments Rebecca Sugar's animated series has covered so far.

Also yes, I am well aware that in the context of the world, Gems are effectively genderless and are merely energy constructs. However, their designs are distinctly female and a lot of their traits, attitudes and conflicts are coded as such.

Pearl was a trusted right-hand warrior in a millenia old war for planet Earth, pining for the leader Rose Quartz. The battles were won, but once the dust settled, the one she was fighting for left for a human being, had a child with him, then basically died. With her having to watch after and guide this kid, Steven, through a lot of uncertainty about his past and his half-alien abilities. All of this despite having an icy and detached demeanor that can come off as uncaring.

Garnet is a fusion, a literal result of two Gems in love with one another that is demonized by Gem society as not right. So she fights for her right to exist basically despite being seen as unnatural, GEE I WONDER IF THAT IS CODE FOR SOMETHING, all while doing what she can to protect Earth and give further advice and aid to the adorably naive but amiable Steven.

Amethyst is basically a party animal. She's brusque, rocking a figure that is rarely seen on women in animated shows, and is the comic relief. Yet when more about her character is revealed it shows it comes from a sense of not belonging considering her past being tied to the agenda of the evil Gem Homeworld.

All of this happens to her and goes to some dark territory, and yet she still parties with Steven, gets into mischief and doesn't lose her humorous outlook on things.

Starting to see why I couldn't just pick one now?

Kaoru from I Can't Understand What My Husband is Saying

Yes, an anime is on this list and it is two years old. However a lot of modern anime tends to use women more as cheesecake fan service or actively under-utilizes them to make the male heroes look better. Which is exactly why trash like Sword Art Online or Fairy Tale can go take a long walk off a short cliff.

However, I have a soft spot for the main character Kaoru in the comedic Slice of Life series, I Can't Understand What My Husband Is Saying.

Simply put, she's an everywoman that deals with mundane problems like paying the bills, keeping in touch with friends and family, and stressing over issues with her husband. But of course her husband isn't normal, he's a blatant Otaku. He has mech models, he watches indulgent anime, he collects figurines of busty women in revealing outfits. And it's all complete gibberish to her.

This is where a lot of the series' humor comes from; an outsider perspective on Japanese geek culture that doesn't condemn or glorify but tolerates. She's still supportive and and reaches out to her husband in cases where she's afraid his hobby might come second to her, but otherwise lets him be when it comes to the culture's more harmless or endearing qualities. She's not the strict den mother taking care of a manchild, nor is she the glorious unicorn that is a fellow geek that is also financially stable and has a well-paying job. It makes her surprisingly human and a joy to watch during the episodes quick three minute snippets.

So there you have it! Women in animation that kick ass in their own special way! Be nice to women so they don't turn into mantis people!
Posted by DigiDesperado26 at 1:00 PM