So this past weekend saw the return of a beloved nostalgic animated series. It ran back in the 2000s on Cartoon Network, had and continues to have a staunch dedicated fanbase, and was known for bringing sophisticated and complex storytelling to a medium that more often than not written off as children's fare by the broader community.

And considering Cartoon Network's track record with bringing back critically beloved animated shows from the 2000s for a new audience while paying respect to the original run, they are basically tap dancing barefoot on broken glass while ritualistically peeling off their own skin with a superheated potato peeler in that regard, I was beyond worried about what would become of this series.

And this is after a lot of mollification came my way. The original creator was involved and had a plan for what he wanted to do. Most of his creative team returned, including most of the voice-actors. And the suits overseeing production weren't actually Cartoon Network but the notably more lax and gonzo mature animation branch of Adult Swim.

I am of course talking about the return of Genndy Tartokovsky's Samurai Jack.

The original series' acclaimed and beloved four-season run still holds up as a modern animated action classic. The plot had a simple set-up: The main hero is a noble samurai hero from the old days of myth and legend setting out to defeat the ancient and terrible master of darkness, Aku. But during their grand climactic battle where the samurai is about to land the killing blow with his evil-destroying magic sword, Aku uses his otherworldly magic to open a portal into the distant future and throws our hero into it. Now in an alien world of machines, aliens, and cyborgs all under the oppressive rule of its evil god king, the samurai, deemed Jack by his peers, must find a way to return to the past and finish what he started in order to prevent this depressing future from ever existing.

Alright admittedly it's a bit more out there when put to text.

But that was the vehicle for the entire show's run. Jack wanders from place to place, helping protect the helpless and downtrodden from Aku's minions, all with the kind of stoic taciturn determination that never goes out of style, all while chasing rumors and legends about ways to return to the past. He gains allies and deals with a wide range of threats from the supernatural like a haunted house or a dragon attack to more sci-fi flavored threats like an evil DJ brainwashing young people with the power of rave music. No, really.

You want a visual shorthand for the entire show's concept, look no more.

It was a show that took full advantage of its set-up for a fantastic combination of genre-mixing and visual flare with intense combat sequences. One episode could be a heart-warming message about hope in the face of an uncertain future, another episode could be an extended chase sequence with intense tribal drums playing all the way to the credits, another still could be comedic with Aku dealing with incompetent minions or Jack losing something valuable like his shoes or his Gi.

But what truly made it beloved was how risky it was at the time. This was an animated show aimed mostly at children ages seven and up that relied mostly on atmosphere, extended stretches of quiet moodiness, and very little dialogue to drive the plot. It didn't explain, it showed. It allowed the audience to either think or feel by lingering and and taking some time to breathe. At a time where animated shows were told to move at breakneck speed all the time in order to keep children entertained, this was unheard of.

So what happened? Well the show didn't have a definitive end. Jack never got his final episode where he went home or defeated Aku. Despite pulling in great ratings the show wasn't renewed for a fifth season by Cartoon Network. There was an attempt to make a movie but it fell into production hell. I have no direct source that can confirm this, but rumors are the production side of things got cold feet after how much money was pumped into another Tartokovsky property film: The Powerpuff Girls Movie, was met with diminishing returns.

So Samurai Jack was basically in limbo. But thanks to a lot of positive word of mouth, DVD sales, and the power of the Internet. Tartokovsky got enough leverage to pitch a fifth and final season of the show to wrap everything up.

What worried me is according to the pitch, he was taking full advantage of the more loose standards and practices on Adult Swim to tell a more mature narrative. For all of the quality the original show had going for it, it was still a children's program so a lot of workarounds had to happen. Jack mostly fought robots for example, no human enemies were allowed to be cut apart. Also while he was able to get dusted up and scraped, Jack could never be seen as mortally wounded.

The problem is I'm too used to video game publishers abusing the word “mature” to mean that they are pandering to a bunch of emotionally stunted manchildren or angry fourteen year-olds who think they have the whole world figured out as some dark and joyless hell hole. And for all of the darkness and maturity the original Samurai Jack had the capacity to show, it was also unashamedly a bizarre looking and fun ride.

The trailers didn't help this either. For reference, here's the original intro for the show:


Mix of Eastern watercolors transitioning into a more angular shapes. Mystical soundtrack mixing with a hip hop beat. Multiple locales promising a wide possibility of adventure. A fantastic narration by the late Mako Iwatani. That is how you do an opening meant for children but universally beloved.

Now here's the intro for the new season used in promo material.


A solemn and brooding monologue about the main character losing the drive for his cause. Depressing scenes of our hero sitting or staring into the distance, passive in the face of horrific adversity. Nightmarish imagery made more dour by harsh angles and a darkened color palette. Jack using the phrase, “hope is lost.” Titles accompanied by a stinging and dark mix of bombastic strings and harsh industrial layers.

All this trailer is missing is some out of place swearing and gratuitous blood spatter and you could convince yourself Image Comics or the guys behind the recent DC superhero movies got a hold of this property.

If this was the direction Samurai Jack was going, I had to be sure it was a direction that made sense. Conceptually, I am not against giving certain properties a darker tone. The critically beloved Watchmen was a dark re-imagining of several Charleton Comics superheroes after all. But far too often they can be abused and perverted to reinforce more angry, juvenile, and purile ideas with absolutely no long-lasting impact. See Mark Millar's Kick-Ass and Old Man Logan compared to their film adaptations if you want a crash course in that.

Which finally brings us north of a thousand words later to my opinion on the premiere of this new season of Samurai Jack....

The first ten minutes were admittedly quite jarring. Opening up with Jack saving some people from robots, but utilizing a diverse set of weapons including a killer motorcycle instead of his unbreakable magic sword. The intro then informs us that Jack has been fighting in this future for fifty years, since the magic that flung him through time has caused his body to be immune to age. The episode then lingers on some more of the show's signature quiet moments where he's making camp... but is then haunted by the ghosts of his family and loved ones lost in the past. Jack even has a mental breakdown at the sight and sound of it all. This is all interchanged with the B-plot revealing the machinations of a zealous cult called The Daughters of Aku, as they train from birth a team of seven deadly women assassins. All raised for one express purpose: to kill Samurai Jack.

So we have gone from a show with intermittently deep, moving and complex tones but ostensibly made for children to a considerably darker tone with themes of trauma, PTSD, the dulling of one's moral center through perpetual hardship, and the thorough reprehensibility of child abuse and utilization of child soldiers.

I was so shocked at this tonal shift it's been immortalized in this tweet that blew up on my feed as the show was going on live on Saturday.

But then the second half of the episode continued and a lot of my concerns were put to rest. For all of the superficial grimdark trappings that Jack has returned with. Riding a motorcycle, rocking bad-ass looking armor and using guns feels more like a sketch on a teenager's notepad than the hero everyone knows and loves after all, Genndy Tartokovsky had all of his bases covered with his explanations. Why is Jack using a grab bag of weapons instead of his magic sword? He lost his sword as revealed in a flashback. How exactly did that happen and is the sword gone for good? We don't know. Why has he lost his way and has become haunted by his past? He genuinely thinks that every single possible way of returning is gone. Why is he still traveling around trying to help people despite all of this? Because he's still a good person, just a lot rougher for wear.

As for the silly and unusual tone of the original series? It was embodied with the episodes final battle: Jack throwing down against the robotic assassin Scaramoush, voiced by the always lovable Tom Kenny. A dangerous robotic warrior that decimated an entire village to coax Jack out of hiding...all while playing the flute to animate his weapons and casually scatting like he's in a blues club. That will do for unusual. That will do quite nicely. 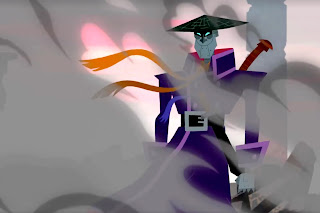 The show will only have ten episodes but if Tartokovsky can stick the landing, this might actually be an updated nostalgia revival done right, rather than the embarrassment that has been the modern Powerpuff Girls or Teen Titans Go.

But as of right now, consider my attention grabbed!