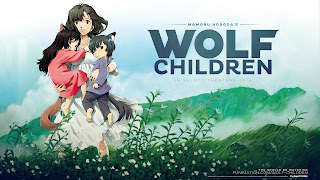 My dear cybertavern patrons, I am about to make a sweeping statement about a creative mind in this column. Since this is the internet, that means I will soon be descended upon by reactionaries telling me off for having no real critical talent based on the credibility of my statement and overly smug assholes who will agree with me and use my statement as a blank check to beat up on the artist they never truly loved. Alright... here we go....

Think about it! In the last movie I looked at, Summer Wars, it dealt with the idea of internet avatars performing great feats to prevent a world-ending catastrophe. Every single major character who helped? Their digital selves were animal people.

And now we have his next cinematic outing with Wolf Children. A movie about a woman who winds up hooking up with a wolf man and has kids. I wish I was being snarky or cynical but that is basically the entire movie. And just like Summer Wars and The Girl Who Leapt Through Time, Hosoda treats this bit of weirdness with a straight-faced level of sincerity and uses it to deliver a powerful narrative about motherhood and raising children.

It also might be my favorite movie he has ever released.

As mentioned above, the story focuses on a young woman named Hana making her way into a university. Showing up to classes, dealing with homework and exams, and of course working part time in order to pay for it all. The usual stressful environment you've come to expect, but always confronted with a gentle smile.

But of course everything changes when he meets a nice young man that is rocking the aloof and mysterious loner act. She naturally grows close to him and, in some very touching scenes, they eventually move in together and become a couple....

But only after a scene where he reveals a personal secret to Hana. He appears to be the last of a race of shapeshifting wolf people, capable of going from human to animal and even in between at will. Hana takes this information surprisingly well. I am not here to judge her taste in men, but for a movie that goes to great pains to paint Hana's world as completely realistic as possible, only to have the love of her life be a lycanthrope and to have the reveal be presented as something touching and intimate rather than horrifying is astounding.

Then things become even more complicated when Hana becomes pregnant, has two children – a boy and a girl, and her would-be husband winds up tragically dying. Quick question, if this scenario actually happened in real life and the pregnant woman gave birth in a hospital to some weird pup babies, what do you think the initial reaction by every medical professional in the building would be? 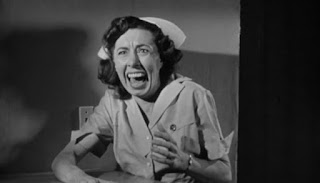 That's what I thought. But it also sets the tone for what the rest of the movie explores: the lengths a mother will go to protect her children, special gifts and all. She doesn't want to cause a stir at the hospital, so she decides to give natural birth in her home. When her partner dies, there's an investigation to their living condition as well as the state of her children. Once again, real world. But Hana doesn't want to lose what family she has left to some horrible probing or scientific examination. So she goes off the grid and gets a new home in the middle of the country, vowing to live off the land and to give her children a chance at a good life on their own terms. So now she has to cook, clean, teach her kids to hide their shapeshifting abilities, and learn through good old fashioned trial and error how to raise her own crops.

There's also the fact that she's also dealing with energetic children that are part kid and part puppy. Have you ever had an energetic dog as a pet? How about a kid that's hopped on way too much sugar or stimulation? The kind of pet or kid that gives you a headache even on their best days? Now combine those two things together and you have an idea as to what Hana is raising, by herself nonetheless since she can't just go to a professional.

If the movie simply focused on her Hana's hardship as a mother raising unconventional children, that would have been enough. But things become next level in the movie's second half, where Hana has to deal with how differently her children are maturing and growing away from her. There's a powerful montage sequence where the sister and the brother are going through school, the sister becoming an astute student with a fiery temper while the brother becomes increasingly detached from his human surroundings – he'd rather be out in the woods exploring in his more natural environment. This turns to conflict between the siblings, and as a sharp stab to Hana who sees way too much of her mate in her son, and having to come to terms with how out of her depth she is.

And it is here that I believe Wolf Children legitimately becomes something special. The movie does such a fantastic job making you relate to Hana and her mundane troubles in the first half that when the stuff with her children happens in the second half you buy into it. There are some admittedly silly moments to the whole idea of the titular wolf children, there's a scene where they're teething so they kept chewing on the furniture for instance. But this is balanced out by more serious and harrowing scenes where one of the kids gets sick and Hana has no idea whether or not to take them to a doctor or a veterinarian.

But even if you take out the fantastic elements at play, this is still a story at its core about a woman who falls in love, starts a family, loses her partner, and has to deal with being a single-mother while having no idea how the children will turn out from a mental or physical state due to not having an ideal amount of information about her passed paramour.

If this was live-action and broadcast on the Lifetime network, no one would bat an eye, but Wolf Children uses its very concept as a metaphor for the unknown. Hana embraces the unknown, even when it should frighten her. One of her children becomes fascinated by the unknown, so she must grapple with her desire to protect her child with the knowledge that the kid must grow into his own person.

I will not spoil how the movie ends, but it is a bittersweet yet beautiful finale that fully realizes a journey of motherhood to its end to the point that it brought tears to my eyes.

It's the kind of small and intimate movie with a pinch of levity and the fantastic that Hosoda is phenomenal at presenting. Nothing feels contrived, motivations are clear, and every scene has just enough time to breathe.

As for Hosoda's most recent cinematic outing that is gonna be harder to pin down.
Posted by DigiDesperado26 at 12:13 PM