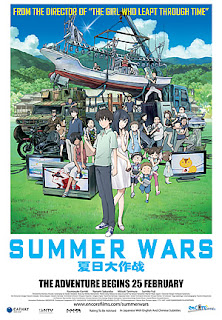 The second installment into Animation Deviation will be continuing our look into the works of Mamoru Hosoda. This week I'll be looking at his second film as director, the drama Summer Wars.

As I mentioned before, Mamoru Hosoda has some very interesting ticks as a director. His movies always have some fantastic element to them, but rather than use them as a vehicle for spectacle or the exploration of big ideas he focuses on the human element. A girl gets the power to time travel so she uses it to fool around and messes things up with her friends for example. His visual style is amazing at both depicting human emotion in both subtle and overt measure without tipping into full on exaggeration. When it comes to animating characters that look and feel real, Hosoda is a real talent.

Seriously, most anime fans think they know good animation but there's a big difference between anime made on a TV budget and something made for theaters. The reason why Japan has so much anime isn't because they appreciate the artform more than Americans, that reason is heavily biased towards romanticizing Japanese exoticism and that will not fly in this tavern while I'm running it. It's because it is usually done on the cheap.

Look at Sailor Moon Crystal for a fantastic example of this. Outside of the intro theme and the transformation sequences, there are a lot of corners cut in terms of the way characters are animated and a fair amount of asset recycling. This isn't to say that Crystal is bad by any stretch of the imagination, but it's indicative at how much mileage studios have to get out of the same six or seven frames of animation.

The above gif is from Summer Wars. That is the only time that animation is used. That is all unique animation that someone had to go into meticulous detail to get right and it looks absolutely effortless. It actually looks like natural movement. Even the mouth, something that always looks chintzy and fake even with Japanese audio coming out of it. That is high quality polish.

Thankfully Hosoda's craft has improved quite a lot from The Girl Who Leapt Through Time in terms of storytelling and pacing, but in some ways it feels like he may have bit off more than he can chew and wound up leaning on certain well worn tropes.

But first, let's summarize the plot. The movie focuses on Kenji, a young man still in school that is also working part-time as a coder and troubleshooter for an all-encompassing social media platform in the world called OZ. Imagine what would happen if you smashed every single social media platform imaginable, Amazon.com, and Second Life together and you'll have the basic idea of what OZ is in this world. But while working during the Summer he gets a truly odd proposition by a woman named Natsuki. A woman he happens to have feelings for but he has a serious case of stock Awkward But Brilliant Anime Man Syndrome. Y'know, the kind that are basically young super geniuses, his whole thing is being a savant in mathematics, but have the social skills of a piece of soap? Anyway, she asks him to join her at a massive family reunion to celebrate the birthday of her grandmother...and to pose as her boyfriend.

Three guesses as to what endearing and charming antics happens from there.

And yet the movie doesn't stop with that set-up. While there are the usual jokes at Kenji's socially awkward expense and a colorful cast of characters to be found in Natsuki's extended family, a more pressing threat rears its head. Through some accidental fiddling with a highly complex mathematical equation, Kenji plays into the plans of a sentient AI that infiltrates OZ and takes over his account, effectively locking him out while the intelligence gains access to all of his information. Information that it uses to hack and steal other people's accounts until it leads to a total loss of communication in online circles, a total shutdown of travel arrangements, and financial madness. All done in order to reach its ultimate goal: access to weapons of mass destruction. 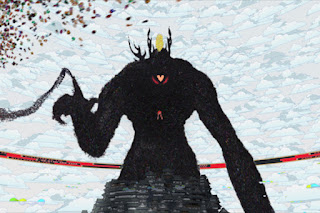 So the movie is half family drama and half inspired by War Games. It's... definitely a mash-up I wouldn't have thought of.

If there is one thing that Summer Wars lovingly brings to the table it is its positive portrayal of social media and, albeit to a much lesser extent, gamer culture. This movie came out in 2009 and it was way too easy for certain films to shame or otherwise underestimate how ubiquitous and empowering interconnectivity was. The cinematic equivalent of “bah, why do you spend so much time on Facebook, why don't you actually go out and actually hang out with people in the real world?” But Summer Wars shows a healthy balance. Everyone in the world uses OZ in their own special way, be it on computers or smartphones, you even briefly see someone use it on an ersatz Nintendo DS, all to coordinate and to plan as well as stay in touch. But when the family reunion and birthday celebrations happen in the movie, everyone is in the moment, talking and laughing and carrying on like any other family would regardless of the time period.

In fact, the Nagano family estate looks like an old traditional home in the vein of feudal Japan, with the grandmother being a fiery yet sweet traditionalist. Which does keep with the Japanese philosophy of respecting the old while embracing the new.

Then there's the visualization of OZ itself. As mentioned before, Hosoda tends to enjoy monster or anthropomorphic designs in his work, and in terms of untethered creative gonzo he is fully unleashed in his representation of this platform. Everyone's avatar in OZ is either a flat 2D sprite, a cute little emoji or a furry of some kind. I mentioned before that Hosoda worked on Digimon shorts before in my look at The Girl Who Leapt Through Time and there are some very clear design parallels between OZ and his take on the digital world from the short, Digimon Adventure: Our War Game!.

As for the positive portrayal of gamer culture it comes in the form of a member of the family Kenji befriends, a young boy who developed a reputation in OZ as an adept digital fighter with the alias of King Kazama. A guy who actually tries to help Kenji by realizing the AI loves games, and as such tries to slow it down by challenging it to an online fight. This eventually forms the backbone of the entire third act where other members of the family use this to their advantage. It doesn't glorify or vindicate the kid's dedication to his King Kazama identity, mostly thanks to how widespread the use of OZ is.

There really is a lot to pull apart with this movie and that might be the closest thing to an issue I have with it. The review focused primarily on the conflict in OZ with the AI but the human drama is also handled really well and ties into a cohesive theme of unity. The AI tries to stop the world from being able to plan and communicate by sowing chaos in order to accomplish its goal of wiping out the world. The family undergoes serious drama and problems regarding Kenji accidentally kickstarting a global crisis, a big appearance by an estranged family member, and even a major character dying, but somehow bands together to help Kenji shut the AI down in any and every way imaginable. Seriously, the entire third act somehow manages to bring together so many different layers of conflict and resolution.It is legitimately something to behold.

Of course there are a few things that hold it back from being a classic. While the members of the family do have different quirks and identifiable characteristics not all of them are really fleshed out. There's enough there to keep your attention and the supporting cast are all enjoyable but there are a few that can easily summarized as “The one who likes Baseball” or “the one who is a fisherman” and so on.

Also while the visuals and action are intense and the drama is well-realized, it can feel like the story has retread some old ground in terms of story beats. No prizes for figuring out who hooks up with whom at the end of the plot or how certain interactions play out.

Also while it hasn't been the most well received by some people I will confess it assumes you are really social media, tech or gaming literate as the movie speeds through a lot of the nuts and bolts as to how OZ works. There is a lot of visual shorthand in terms of visual design, UI layout, how certain applications are used, etc., so if you have trouble doing so much as getting a Facebook Flash game to run you may need to ask some people for a primer.

But this is a case where presentation helps gloss over familiarity and lets the originality shine through. I won't exactly call Summer Wars my favorite of Mamoru Hosoda's filmography so far but it's definitely an enjoyably creative mix of digital action, family drama and cheesy awkward romance. As for my favorite of Hosoda's work...tune in next week.

Summer Wars is available on DVD and Blu-Ray through Funimation as well as Amazon Video.
Posted by DigiDesperado26 at 9:21 AM