Ladykiller in a Bind: An Adult Game That Actually Feels Adult 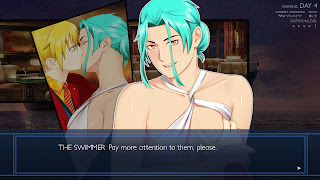 Warning: This post discusses adult video games with explicit sexual themes and acts. You have been warned. Also this post was supposed to be up last week, but personal obligations prevented me from being quick. I may have no readership but that is no excuse for laziness!!

Bartender, break out the specialty drinks and for the next several hours it's Happy Hour. Because oh boy do I have a topic of discussion for you.

We are going to talk about sex and intimacy in the context of video games.

Those who came in here thinking we don't check for ID or legally acquired prosthetics, one way or another you're going to feel older now. After all, age is a number, the only true measure of well spent years is experience.


Back to the topic at hand: video games are kind of terrible at depicting the intimacy and trust that goes into the act of sex. As it is mostly treated now, sex in a video game is treated as a reward for putting in the right inputs at a certain NPC, making the dirty deed feel like a goal for being a Nice Guy/Gal. Oh, you listened to my tragic backstory, told me some basic pablum about not giving up on my beliefs and helped me overcome some inherently toxic bias or hang-up over the course of our adventure to save the world, I shall now throw off all my clothes and we shall screw like we're in an HBO porno. Yeah... that's not how it works folks.

At its lowest and scummiest, video game sex is used in a retrograde and decidedly aggressive sense, usually at the point of trivializing rape or even as a juvenile attempt to appear adult. Look at the sexual acts depicted in any of David Cage's experiences for an example of the latter or the flash games made by Fenoxo for an example of the former. This is not to outwardly demean or condemn the content provided in these experiences, what turns you on turns you on as long as it isn't hurting anyone and you have a strong understanding of what consent means in a weird and alien place called The Real World, but when these are the only options when it comes to such a vast and complex act of intimacy as sex, it paints the world of gaming as cold and chaste at best or utterly depraved at worst.

Things are a bit better when it comes to the give and take of intimacy and protection on multiple levels. The quiet companionship found in Yori from Ico, the mutual give and take of Booker and Elizabeth in Bioshock Infinite, the entire bonding experience with Clementine in the first season of Telltale's The Walking Dead, the list goes on. But even then examples of a proper romantic relationship are glossed over or truncated since the idea of slowing down the game for such a thing is considered unengaging or boring. 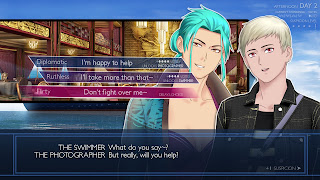 The initial plot is a bit of a headscratcher and feels more like a set-up than anything else. You play as the identical twin sister of a guy who, through an elaborate scheme that is so gonzo and ridiculous I won't give it away here, is forced to dress like him and impersonate him while attending a week long graduation cruise for his high school class. There is also an elaborate popularity contest where every student has votes which they can give away, the one with the most at the end of the cruise getting a cash prize of five million dollars. So the game comes down to whether or not you manipulate and deceive your classmates to get the big prize, enjoy the company of several ladies while trying desperately to maintain your cover, or something inbetween.

Yes, ladies. Ladykiller in a Bind is a challenge to review when it comes to its arousal and its subject matter since it predominately panders to a distinctly queer female orientation. You'll more easily find nuance in an episode of The Smurfs than anything distinctly phallic in this adventure. There is a level of audience voyeurism to the proceedings since the entire narration is given by the heroine after the fact to her brother since he needs to “understand all of the details,” which does a great job of making the entire scenario particularly steamy to a heteronormative guy such as myself while not alienating its clearly intended audience, but the big instances of intimacy in this game is dominantly between two women. And if you think that is the deepest depths of depravity this game sinks, you have no idea how deep the yonic rabbithole goes.

Of course if this visual novel was just about lesbians being nasty I wouldn't have dedicated so much time and thought to it. LKIAB makes itself a must-play experience for how well it handles choice and dialogue options. Like most visual novels, the gameplay is hands-off, with you cycling through text until you are given several options on how to act or talk, but what makes Ladykiller something next level is how the choices are presented. Players are all too familiar with dialogue options being given all at once with simple classifying factors: the Nice answer, the Comedic answer, the Asshole answer, etc., but in this game's case the dialogue options pop up and vanish naturally with the flow of the conversation. 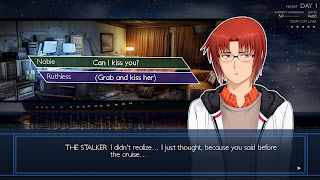 Say for example two characters are discussing a minefield of subject matter like religion, as you click through the text a notably aggressive answer might pop up where you think it's a load of malarkey, but as the conversation continues you discover that faith helped prevent a character from taking their own life, that dialogue option vanishes since it will now be incongruous with the tone. Sounds simple, until because you held off you are granted a sympathetic dialogue option where you empathize with said character in order to get into their good graces. How does this not become a confusing spat of trial and error? Well...you can just feel that now's not the best time to interject. There are more measurable and deliberate design choices like how all options will gray slightly when you are on your last chance to answer and how certain dialogue options will come with subtitles to determine the immediate outcome of your actions: say this and get X votes but raise your suspicion by X amount. But there were several notable instances where I discovered more impactful decisions and actions by just intuiting something from the conversation itself that I didn't know the full story to comment. Almost exactly like a real conversation. The amount of thought and deliberate design in such intricate dialogue trees is brain-melting and on that alone, Christine Love should be very proud of herself.

There is also a notable Telltale Game's style refusal to answer mechanic where you just let the conversation continue with no personal input. but it's not always without consequence and characters will remember your quietness.

Which brings me to another one of Ladykiller's mark of accomplishment: character interaction. The characters themselves aren't exactly multilayered, the entire cast eschews traditional names for titles like The Beast, The Beauty, The Swimmer, etc., but their surprisingly organic and real dialogue with one another helps this visual novel sizzle. As an extension of the dialogue options you only have a small amount of time with certain characters, but depending on which ones you gain a following with will determine how often they pop up in future scenes, each with their own unique interactions with other characters. It's one thing to see someone like The Beauty as a hardcore domme in BDSM in a rough sex scene, but it's another thing entirely to see how she naturally and playfully discusses mundane topics with The Stalker who continuously uses anime references due to mild social anxiety. To use an old production adage, it's not the originality but the presentation that makes the material work. 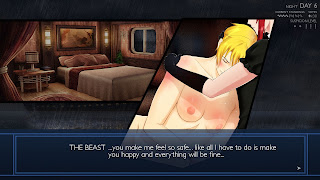 Of course Ladykiller in a Bind has some problems and most of them come from the conceit of the protagonist basically impersonating someone else. On the one hand it keeps things tense when it comes to maintaining a cover, but then when any intimacy scenes happen with certain characters you can hear the script bend over backwards (no pun intended) to justify why they don't immediately raise a stink or bring up some justifiable trust issues. “I thought you had a dick! What else haven't you told me!?” you can practically hear the hypothetical Dame Not Appearing In This Game say in an unintended bit of irony with the game's themes.

Yet with that one misstep in the narrative department I have to highly recommend Ladykiller in a Bind. When it comes to its adult content it's definitely on the high end of quality, the kind of quality that puts it out of the label of smut and into the echelon of erotica. Yet from a purely design perspective the game is fascinating with how it handles multiple outcomes, player input and even the nature of dialogue options.

So please by all means go out and download this sick filth, there's some nutritious goodness hidden in there.

Ladykiller in a Bind was developed by Love Conquers All Games and is currently available on Humble Bundle.
Posted by DigiDesperado26 at 7:50 PM