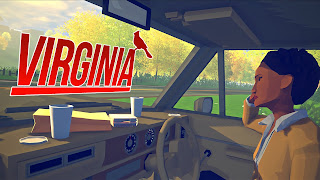 Written below is a review I wrote for the interactive drama, Virginia. It was originally intended to be published on another site but complications have lead to it being placed on a crank file. Keep that in mind and enjoy my Stream of Consciousness review.

The word cinematic has become a dog whistle to game critics in recent years. At its worst it is a buzzword that means nothing. At its best it describes a game that uses elements of film wisely without detracting from gameplay. Virginia, an interactive drama from developer Variable State that proudly markets their experience as being the best possible version of the latter. Using film editing techniques in a unique and seamless manner within gameplay to allow for a compressed piece of storytelling that pulls inspiration from the likes of Fargo and True Detective. It's a dangerous position to walk between gaming purists and those more open to increasingly hands-off experiences, but while Virginia has some small problems the overall experience is decidedly novel and a step in the right direction for the emerging subgenre.

The Vanishing of Lucas Fairfax
The game opens in 1992 with you assuming the role of freshly minted FBI agent Anne Tarver, a woman of color who has been given her first assignment: investigating the case of a missing boy in the small town of Kingdom, Virginia. At the same time, you are involved in a secondary assignment, an internal investigation of your partner, Maria Halperin. What transpires starts as a simple police procedural story that unfolds into a mystery thriller before descending into a dreamlike descent into a psychodrama.

The game immediately declares its strengths with confidence. The musical score by Lyndon Holland is a grand sweeping epic that brings operatic emotion to every scene, the visual style uses simple low poly character models and a quaint almost garish pastel color palette, juxtaposing idyllic almost Rockwellian imagery with foreboding and intense musical swells. Character animation can look unnatural and a bit odd, but a lot of personality is injected into such motions, both idle and pronounced. This is all especially important because the storytelling is done through the environment, character interaction, musical choices and the occasional bit of text. There is no dialogue in the game's entire two and a half hour runtime, yet it is completely possible to understand each character's motivation, personality type and mentality from their body language alone. Even in bigger budget productions, that kind of verisimilitude is rarely seen. 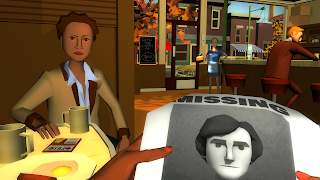 As is the case with interactive dramas Virginia focuses less on traditional gameplay and primarily on immersion and character dynamics. The entire narrative is in a fixed first-person perspective from Anne's point-of-view with your actions limited to looking, walking, and contextual interaction with various objects to continue the plot. All standard fare for experiences like Firewatch and Gone Home that keep the player in the shoes of the protagonist through everything that transpires, from dramatic emotional reveals to the more mundane and tedious moments of walking for long stretches. Virginia on the other hand uses small snippets of gameplay the same way a filmmaker would use an establishing shot, and then right when the player understands where they are geographically or the content in the scene concludes, the game “cuts” to another scene with the player elsewhere in a seamless transition. A similar technique was used in the 2012 indie game, Thirty Flights of Loving, but Variable State took the concept further with proven cinematic shorthand. Fade transition to determine an amount of time has passed, cutting to a black screen to signify the start of a new day, smash cutting from location to location to simulate a long trip expressed in a time lapsed state, the list goes on. The first time it happened in my playthrough it was legitimately jarring to go from walking down a hallway to suddenly be halfway down a stairwell then outside a door near a boiler room, but within minutes I became completely comfortable with it since the cuts weren't too rapid and it helped cut down on what could have easily been fifteen minutes of interactive fluff.

It is a bold move by Variable State that is quietly revolutionary in its execution. It would be one thing if the game just jerked the player around from location to location with no sense of cinematic language, even comedic experiences like The Stanley Parable know a thing or two about well placed transitions after all, but Virginia marries the execution of savvy scripted artistic film direction with the inherently impactful emotional punch that comes from an interactive medium. There's a particular sequence about halfway through the game where Anne wakes up at her partner's home after a long night, goes downstairs, has breakfast, then they continue the investigation. In a more reflexively self-conscious experience the entire exchange could have taken fifteen seconds with the camera focusing on a distinct character tick and maybe one or two details before coldly moving on without letting the player drink in the atmosphere, utterly afraid they might not see or comprehend everything presented. However, the scene lasted roughly four minutes because not only was this the first time Anne entered Maria's home but it was the first time a large amount of information came to the forefront, not just of Maria's living condition but also of her emotional baggage, which culminated in a scene of mutual respect and understanding between the characters punctuated by sitting down and having a meal together; all at the player's own pace and discretion.

Just on these merits alone Variable State receives the highest praise with its innovation in the integration of both film language and interactivity, but as far as interactive narrative quality is concerned, Virginia has some issues. First and foremost a telling side effect of having controlled scene transitions is that while pacing is consistent, it can actually alienate the player, making them feel less like they are fully experiencing Anne's journey firsthand and more like they are an increasingly detached cameraman simply witnessing things happen. There are some attempts at character interest such as collectible bird feathers and flowers peppered throughout the experience, but when it comes to active contribution the player just occasionally clicks on an object and lets a scene play out. It works when it works well and doesn't impede upon the player's limited control, but then there instances where it just leads to confusion. 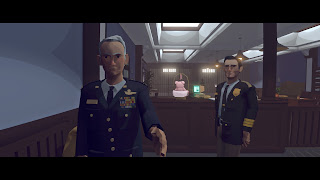 This point is particularly poignant when the game reaches its final act and emotional climax. As mentioned before, Virginia utilizes dream sequences and uncanny mindscapes full of odd symbolism throughout its run, anything from stress induced nightmares Anne is having during the case to inverted soul-gazing punctuated by evocative imagery. It's caused Virginia to be unfairly compared to the uncanny and off-putting imagery used in David Lynch's Twin Peaks, the most deliberately unsettling recurring elements here is the image of a buffalo and a cardinal which is hardly as unsettling as half the things FBI agent Dale Cooper experienced, but it makes the experience feel closer to an abstract tone poem where the focus is less on logic and cohesion and more on selling a mood. But broad emotional connection and a threadbare breadcrumb trail can only make us empathize so much with the cast that when the third act dives into a complete psychedelic succession of vignettes and poignant crescendos to character arcs it feels like a pay off to a second act that never came. Using the earlier example of meeting Maria's in her home, the finale of Virginia assumes that not only did you take that scene for its intent but then, most likely in an ill-conceived use of visual ellipsis, jumps to a bunch of allegedly emotional pathos that is begging for more context.  There is an emphatic pay off to themes of duty, loyalty and friendship and Virginia does everything in its power to sell these elements with its minimalist approach, but there is only so much detail that can be gleamed from creative broad strokes. As such, the big revelations don't hit with as much punch as they should and what ostensibly feels like a conclusion to several story threads feel like a rush to the credits.

Of course this obfuscation can be deliberate by design. Director Jonathan Burroughs brings a clean and grounded visual style to proceedings so when something surreal does enter the scene it is an active choice rather than a chaotic placement for its own sake. It will be the subject of debate just how much any of it really means but that is an essay for another time.

As a linear experience, Virginia doesn't completely stick the landing but the strides it takes make an experience worth checking out for yourself. Equal parts unsettling, endearing and morbidly fascinating, this is one trip to a small town that you won't forget.
Posted by DigiDesperado26 at 3:05 PM