Fall: The Season Of Doing Something Different 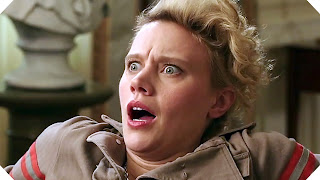 Bartender, patrons, ominous looking spider drone taking pictures of structural weaknesses in my establishment but I allow to remain because he bought some peanuts, I officially feel more in my element. Not because I hit a lucky break with a larger games press website; I didn't. Not because I can finally be with someone who can put up with my weirdness; jury's still out. And most certainly not because I finally sat down with a head doctor and figured out what that ominous whispering is about; as if I could afford it.

No, the reason is simple: Fall is here, and I love Fall!


Yes, Fall, or as some fancier sons of guns might call it, Autumn, I absolutely enjoy it! It's perfect hoodie weather. There's just enough rainstorms to keep things cool and breezy. A bunch of fancy arthouse movies start coming out alongside major video game releases which means plenty of work. Even when the season is at its worst, with the encroaching infection of pumpkin spice flavored-ANYTHING hitting store shelves and retailers trying to shoo the whole season aside to make room for more pre-pre-pre-pre-pre-Christmas merchandise, there is so much about it that just makes the whole year worth it.

But the biggest reason of all is Halloween and my Special Ritual that goes with it. Cards on the table: I do not go out of my way to indulge in horror-focused media. Overactive imaginations combined with an inhuman attention to detail go absolutely apeshit when you plant something as frightening as a horror scenario in their head. Something horror-esque but in the context of empowerment is absolutely satisfying: Ghostbusters, Resident Evil 4, The Dresden Files, etc., but when it's perfectly clear that something is trying to kill you and has the upper hand, that is when I promptly stop and run several miles away from it immediately.

But what is the point of Halloween if not to boldly face something that scares you? To fabricate something meant to induce fear in a safe environment and sharing it amongst the community? It goes a long way to making that fear not seem like a big deal, either because other people sympathize or other people point out how silly it is. The giant monster coming to eat you is a lot less scary when you see the zipper to its costume sticking out, and the teenager about to be sliced to ribbons by the serial killer suddenly becomes less sympathetic when you notice she is a horrible person that dug herself into her own early grave.

However, doing what I've been doing for years has lead to a problem... it takes a bit to scare me. The interactive nature of video games and the fact that I have to cover several horror games whether I like it or not has made me numb to most conventional scares. It's not because I'm a latent sociopath, the BBC still haven't gotten back to me about releasing the frozen corpse of Sherlock from the hiatus fridge, it's just that on a psychological level I see monsters more as challenges and problem that needs to be solved rather than something to be feared. A mindset that has actually been proven in scientific studies of gaming. 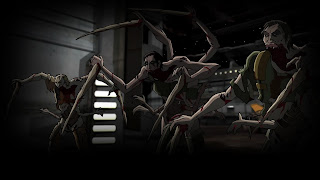 The Necromorphs from Dead Space. Basically zombies with horrific appendages. Perfectly satisfactory pieces of grotesque body horror that will haunt your dreams. As for me, I've already mentally taken its limbs off and started filming it powerlessly flopping on the floor before it finally gives up all while I'm already calling a cleaning service to deal all the blood, puke, and pus.

Alright, a bit outrageous but how about a classic slasher from the 80s? 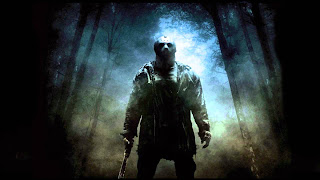 Very simple. Big, tall, muscular, has a machete and can creatively use the environment. Also has plot convenien- I mean the ability to just show up wherever for a jump scare and a kill. I'm in Camp Crystal Lake, recently finished having sex with an airhead slut of a high-school girl with low self-esteem and Mr. Voorhees is after me. Very first gut reaction? Blind him with a piece of cloth or fabric, turn on separate sources of sound, then go immediately to a car and drive away! Jason might have supernatural strength but he can still be blinded and deceived. This jaggoff got made into a puppet by a wise-cracking supernatural child murderer so clearly there is precedent.

But what about a personal fear like say going to a bar and associating with people outside of my comfort zone? Mingling with conventional individuals that I am sure are kind but just weird me out due to how milquetoast they are. The unofficial extras in the world that is my life.

Too elitist and condescending for you? How about the fear of experimental cooking? Trying a new recipe that can go disastrously wrong but you go for it anyway at least once just for the experience?

How about things just becoming too by the numbers and familiar? The fear of nothing progressing? Pick up a book if you don't normally read. Learn a new skill or at the very least research it. Whatever it is, take an opportunity to look into the dark and the unknown and shine some light.

My first year of this ritual was actually of the most lewd and base nature. I saved up some money and as conservatively as possible went to a Gentlemen's Club. Paid a cover, had two or three drinks and watched ladies dance provocatively. No, the internet wasn't down, no I'm not a pervert, and no I am not single. But the usual social stigma and ill repute that such establishments have gave my initial experience the kind of terror any braindead teenager in a slasher movie would be filled with. I'm gonna be that stereotypical slightly overweight guy there amongst more hardened seedier individuals and other deviants. The girls were gonna proposition me then reveal they're part of a sting operation for the FBI and suddenly I'd be on TV then put on the Megan's Law site. Think up every single possible scenario for how such a thing could go wrong and they were playing in my head the entire time. On loop. And Shuffle. Some even remixed into nonsensical combinations!

Ever since that one instance however, I made it my Special Ritual every single year and it has been for both big things and small. I took a risk on Hollywood by going out to see the new Ghostbusters directed by Paul Feig and wound up having a fun time. I'm actually listening to the funky end credits song right now as of now and absolutely loved the cast, Kate McKinnon in particular. I started this blog and branched out to Tumblr mostly to get over a social anxiety tick. It's one thing to write professionally and carefully word your opinion, but another to know that your opinion is actually worth more than others. If the side effect is that I gather more self-confidence to assist me in my future projects and commissions, even better. I've quietly returned to the realm of public speaking through two podcasts with several peers. I recently discovered the fascinating world of animated show criticism thanks to the online pseudo-celebrites Phantom Strider and The Mysterious Mr. Enter.

Finally in most recent memory I have discovered that the horror game genre has finally begun to come into its stride; its influence helping me grow in game literacy and critical analysis. Legitimately unnerving and messed up intellectual horror that goes beyond simple monster attacks and resource management. There is still the gold standard of psychological existential dread that is Silent Hill, but there was also the mindscrewy P T, which still sits on my PS4 undeleted. Spec Ops: The Line was a dark twisted condemnation of the rising popularity of Call of Duty. Darkest Dungeon incorporates Lovecraftian cosmic horror into an already bleak dark fantasy RPG/ Resource Management Simulator. Also I recently played through the demo for Outlast 2 and- 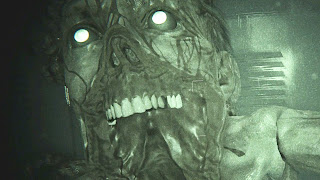 Which does bring me to the last point I did want to make about this whole post: its an exercise in self-improvement not machismo. I'm not doing this to seem better than everyone else or to say I did it, I'm a humble guy like that. It's just something that I found to help me experience the spirit of Halloween even if I don't go out of my way to get wrapped up in the ghosts and gore. I love me some urban and gothic fantasy on my own terms (which usually involves a shotgun full of salt and iron shavings with a silver bayonet attached) but when it comes to something that scares me or fills me with dread, I'll take cautious yet determined new experiences over spooks during All Hallows Eve.
Posted by DigiDesperado26 at 1:20 AM