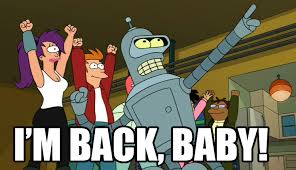 Welp, that definitely took longer than a week....


But first of all, happy Memorial Day. Never forget the sacrifices made by our armed soldiers in service of our country. Give them a wide berth, they've earned it, freedom isn't free, etc..

Now confession time. I'm not going to beat around the bush; last month kicked the utter crap out of me.

There was an attempt to get into freelancing my prose to Fiver that ended pretty badly.

There was a falling out with a lady friend I had regarding the normalization of the extreme stances taken by both Left and Right leaning YouTubers, social media circles, and pundits that wound up stepping on several dozen toes, leading to a lot of hurt feelings and self-loathing. Things are evened out now but it was pretty bad for a while.

Also, That Random Podcast Show, that thing I occasionally link on this blog like a tactless huckster, is officially on Patreon and we're trying to make that more of a thing. Which has been stressful both because we (my co-host Michael and I) are trying to step up our production quality of the show and we're trying to incentivize patrons with new tiers and rewards which has been a logistical nightmare.

And also let's not forget I cut my teeth as Reviews Editor at The Game Fanatics, while also dabbling lightly in news updates, critical features, and getting the rest of the team to get their shit together. Complete with E3 around the corner so we've had a larger uptick in traffic, audience demand for speculation pieces that drain me to no end, and a bunch of insufferable trolls who think we're a bunch of paid off shills that should totally just give up and get a "real" job.


Of course I'm not complaining and bellyaching about any of this. In fact, multiple times I've stated that writing this blog has been on the whole quite therapeutic,  but let's just say after a while the stress and emotional strain got to me and what originally started as a brief one week break from the Cybertavern escalated into a month.

But, as the funny silver robot above as proclaimed, I have good news everyone: I'm back baby!

So first thing's first a new schedule of things to come:

- First off, Multiverse Desperado will continue with Chapter 12 of the Mass Effect Jump coming out...about ten minutes after this post goes live. I love Mass Effect, I love the concept of JumpChains ever since I became aware of them, and I have a strong urge to complete stuff!

- Animation Deviation will be returning but this time on Tuesdays. That's right! More back to back stuff! And of course to make up for lost time it will be an observation as a whole on the revival of Samurai Jack!

- Wednesdays will be the return of Sidequest Corner, my column about annoying or interesting bits of game design, game theory, or game business models in modern gaming. Trust me, I got plenty of fuel for that!

- Thursdays will be Self-Promotion Central, I mean Retro Prose! A column where I basically dig back into my back catalog and find some of my older less experienced work and repost it, commenting on where I was coming from, how much more evolved I've been since then, and whether or not it holds up.

-Lastly Fridays will be not be an official blog post but me officially streaming on Twitch courtesy of my PS4. Every friday night I will work my way through a game I haven't gotten around to playing, or maybe just chilling with my fireteam in Destiny. Either way if you can't make the show, I will link the archived stream here on Saturday nights for your amusement. Get there fast, Twitch only holds on to these things for so long!

So yes... I'm back, and I'm gonna be doing all the things now! So pull up a chair, drinks are on me!