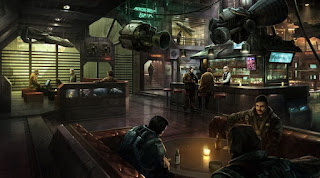 Welcome Internet to the Cyber Tavern, where everybody needs a tall one to deal with being on the Internet.

So since you're here, time for a less flowery explanation of this blog. I write about video games and gamer culture on a semi-professional basis. I freelance my work, and am currently a rowdy individual on the GameBit Podcast. I'm also a  big media sponge for pop culture, then again aren't we all in this social media age? I deal with editors, write long-form op-eds, and with entitled assholes who think I'm an entitled idiot that isn't "completely objective" despite the fact my work can be summarized as informed opinions - the textbook definition of subjective - and I needed a form of release from my stress.

It can't be more video games for two clear reasons. First, I have an addictive (or in the case of gaming, compulsive) personality so even something meant for abnegation like a JRPG or crafting sim like Minecraft would lead to a lot of bad habits. I am able to offset this in a professional manner when I'm crunching for review purposes or writing an op-ed, mostly because despite what anyone else says doing this line of work is 80% sitting at a computer's blank screen trying to express thoughts with words, 10% aggressive editing due to being your own harshest critic, and 10% actually playing video games; but it's a dangerous tightrope to walk. A tightrope walk that will only exacerbate the stress I am trying to alleviate.

Second, game burn out happens. You play so much in such a short amount of time and are expected to think critically about what you are experiencing the whole time that you don't want to deal with it anymore. I've actually had instances where I wanted to just chuck all of my electronics out the window and just go native for a while, but I talk myself out of it by thinking about how there is still insight and wonder to be found with the medium... as well as how much it would cost to replace everything once I calmed down and I am not in the mood for dealing with another loan shark. I already lost one kidney.....

It can't actually be alcohol either. Why? Read the first reason above for one. And two, alcoholism and I have a adversarial relationship involving complex emotions regarding my father that I do not want to deal with here. Yeah, end one paragraph with loan shark joke and the other with dark personal details. Watch out readers, the tonal whiplash might snap your neck.

Which finally brings us here to this quaint little Blogspot fixer-upper. It's simple, the voice is a lot more casual, no editorial oversight is a blessing and a curse so read at your own expense (commas kill coherence people!), and the abstract concept of sitting at a bar and confiding in a digital bartender about my annoyances and joys sounds more therapeutic and fiscally sound than going to an actual bar. Plus, you know, I don't think normal bartenders will know or even care about stuff regarding Steven Universe, Bojack Horseman or the Deus Ex series.

Which brings me to why I'm sticking with a cyberpunk motif for this. Well, just calling it "The Blog Where I Complain About Stuff" isn't nearly as cool sounding if more honest than most blogs out there, and I have a certain love for the Cyberpunk genre. It's a combination of being a 90s kid right when the genre was at its most fertile with stuff like Ghost in the Shell, Shadowrun, etc., and when it comes to the protagonists in those stories I feel a certain level of kinship. For the longest part of my life I was an aspy, that is Asperger's Syndrome which is on the Autism Spectrum in case you didn't figure that out, and it lead to a lot of social anxiety and problems with making connections with people despite having a brilliant mind. Not to brag but I was deep-reading at a Master's Degree level back in 3rd Grade at the cost of zero social skills. So the themes of fighting to retain or redeem humanity in worlds that have become cold and harsh appeals to me on a deep personal level. Plus taking down corrupt evil megacorporations with film noir detective work, gunfights and robot parts are cool as hell.

Which finally brings me to setting down a modest amount of ground rules for this blog, and my fellow readers' discourse:

First and foremost: I have zero tolerance for toxicity. Use any name or label in a derogatory sense, and you will be out on your ear, my bouncer is the admin tools and he's efficient as hell.

Second of all the Cyber Tavern is a place for thought cataloging and polite discourse over complex subject matter, it is not a "safe space" to spout ignorance. Basically an extension of the first rule but I am a proud LGBTQ ally, it happens when the coolest people you hang out with are non-heteronormative in the most diverse of ways and I do not want this to turn into a place where people complain about rising awareness and progressive trends on the simple basis of not liking change. Grow up and learn to express in layers people!

On the flip side of things, while I do advocate activism for marginalized groups of people getting a raw deal, the Cyber Tavern will not be a soapbox for extreme SJW activity. For those needing clarification, let me paint an example: an activist is someone who petitions and works hard to convince a school board to include ramps to allow wheelchair bound students access to the school, an extreme SJW is someone who will yell and actively condemn everyone else for their "ambulatory privilege" while ignoring any form of compromise as not being enough. There are shades of grey to be sure in this distinction but for the most part I will avoid Social Justice topics and in the case where I address it I will do everything possible to parse it as inoffensively as possible.

Finally, I will do my best to put up a new blog post at least once a week on weekends. It can be anything between what I'm working on currently, what my overfocused brain has chosen as its unconscious obsession at the time, or even mild reviews or observations about a show, movie, or smaller video game.

Open up the kegs and get out the nanite paste people, we are open for business!