Yeah, read the title. I got nothing more to add.

Hey Arnold is yet another beloved animated show from the 1990s that I remember fondly for all the right reasons. It was a low-key animated show that was more about the goings on of Arnold and his classmates at P.S. 118 in the big city primarily focusing around character interaction and the mundane trials of childhood as well as general antics of urban adventure like investigating urban legends The kind of show that could have wacky characters, then dedicate an entire episode to why they are that way and make a compelling fifteen minute drama out of it. Episodes focusing around Chocolate Boy, The Pigeon Man, and the infamously poignant “Helga on the Couch” are great examples of this.

But after a respectable five season run on Nickelodeon, and a big-budget theatrical film release that many fans write off as being non-canon due to it being forgettable and a notable behind-the-scenes nightmare for show creator Craig Bartlett, the show concluded in 2004.

And if this was any other show that would be it. Except this was a show on Nickelodeon for one. Just about every major show they had got a finale, be it a final episode or a TV movie that ends things on a high note. The Rugrats cartoon got several animated film adaptations and an unofficial series finale with the All Grown Up special...which then spawned the spin-off All Grown Up. Fans don't talk about it. Doug got a final episode where the character graduated high school, ending things on a high note until Disney bought the show and ran it into the ground. The list goes on.

Second of all, the final episodes of the show hinted at a larger finale, which is strange to type out since the show's appeal was its mellow and mild atmosphere and simple urban location. After basically five seasons of seeing the antics of Arnold living with his grandparents in a boarding house full of eccentric personalities getting into adventures with his friends, dealing with bullies, and being an active member of his community, it was revealed that his parents were actually good-hearted philanthropic adventurers that continually traveled to South America, and vanished on one last trip to assist the natives, the Green Eye People. The final episode of the show ended with Arnold finding his father's journal, and hidden inside was a map, which could lead him to where his parents ventured off to.

And the movie that was supposed to resolve one of the biggest mysteries show, give closure to multiple threads including the running gag of Arnold's last name, supporting character Helga Pataki finally getting around to confessing her love for him never got made.

But after thirteen years, Craig Bartlett finally made it happen this Thanksgiving Weekend with Hey Arnold The Jungle Movie. 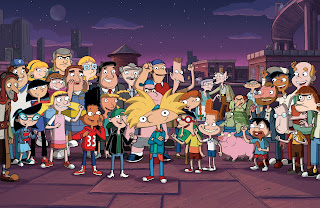 And man oh man was it so completely worth it!

I honestly can't believe this movie got made, even now after writing this it feels like a dream, and it reads exactly like the kind of film Craig Bartlett wrote down thirteen years ago and finally brought it out of mothballs.

But yes, a brief plot summary for the sake of formality. After discovering the map in his father's journal, Arnold has been pouring over the details, trying to find out what caused them to mysteriously vanish, even having intense nightmares about him traveling to the country of San Lorenzo and it making turns for the worst.

But then the plot kicks into high gear when his teacher Mr. Simmons reveals a contest where the most selfless and charitable student who submits a video presentation of their community service can win a class-wide field trip to San Lorenzo and meet the local relief organization there.

And without missing a beat, Arnold works on a project with his friend Gerald to make a home for the local weird “yet endearingly sweet” Monkey Man...and it blows up in their face.

Then about three minutes later, Helga Pataki, the brash tomboy who has been in love with the football-headed protagonist from episode one, to an almost stalkerish level due to some clearly subtextual issues in her home life.

Sidebar: The “Helga on the Couch” episode where we got a refreshingly healthy look into this family dynamic and probably the only example of a therapist on a show in a positive light helping Helga deal with this developmental stage of her life was basically downplayed by Nickelodeon because of stupid “think of the children” reasons, to the extent that a planned spin-off “Hey Helga” was basically dead in the water. No real context for that, just pissed that that show never got made. Bartlett, talk to Adult Swim.

Anyway, she reveals that every single good deed Arnold ever performed throughout five seasons of the show are on tape. She recorded and kept records of them in a hidden room. A little editing later, and the video submission, basically a giant montage of some of the high points of the show, was complete. And for the record, there was plenty of material to choose from. Everything from cleaning up a vacant lot and turning it into a baseball field, helping an old singer find a second wind in his career, helping a retired baseball player remember his love of the game and opening a sports-themed hot dog restaurant, helping several unusual or socially anxious members of his city spread their wings and reach out to other people, mediating and ending a teacher's strike at his school, getting the entire community to work together to get into the Guinness Book of World Records, helping one of the residents of his boarding house re-unite with his daughter who he hasn't seen in decades due to being separated by a war in his home country on Christmas, and accidentally breaking up a counterfeit penny operation while investigating local caverns for proof of a local urban legend.

My god, he's done so much for still being in elementary school....

So naturally he won the contest and we are off to San Lorenzo!

And from there, the movie basically turns into a kid-friendly adventure story with hidden civilizations, complex puzzles and death traps that wouldn't be out of place in an obstacle course in Legends of the Hidden Temple, and a major villain in the form of an evil river pirate known as La Sombra. Slapstick and ingenius tinkering and puzzle-solving abounds, and we finally get some big moments that have been almost two decades in the making. Helga confessing her love for Arnold, the true final fate of his parents, and a definitive end to the series that honestly brought a tear to my eyes.

Seriously, that's it. I really have nothing more to say.... Alright there are a few minor elements that did concern me. Watch out, not only are these spoilers, but it's also a format more of less stolen from Josh Loomis' blog, Blue Ink Alchemy.


That's about it. Seriously, if you loved Hey Arnold, track down this movie on Nick's streaming app or on your cable provider's catch-up service. It is totally worth it.

Now where the hell is that piece on .hack//SIGN I kept saying I was going to write....
Posted by DigiDesperado26 at 4:57 PM